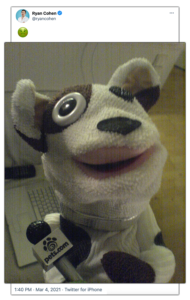 In a tweet that was immediately deleted, Ryan Cohen shared an image of the former Pets.com mascot along with a nauseated face emoji.

Pets.com was a short-lived e-commerce business that sold pet accessories and supplies direct to consumers. It launched in August 1998 and went from an IPO on the Nasdaq to liquidation in 268 days.

CNET named Pets.com as one of the greatest dot-com disasters in history.

After Pets.com liquidated, Hakan and Associates and Bar None, Inc. purchased the rights to the puppet under a joint venture called Sock Puppet LLC for $125,000 in 2002. Bar None, Inc., an American automotive loan firm, gave the puppet a new slogan:

“Everyone deserves a second chance.”

Hilariously enough, the mascot can be seen in a pets.com TV spot, taunting a delivery driver over his shorts.

“I like your shorts buddy!,” says the https://t.co/OoZoVlt4KP mascot in the commercial from the screenshot @RyanCohen tweeted.

Coincidence? Or some three-dimensional trolling? pic.twitter.com/xvuqesvFsP

Update: As of 2:19 PM, Ryan Cohen has issued an updated tweet of the sock puppet, with the pets.com branding most notably removed. We can only assume his legal team advised against using Petsmart’s trademark. 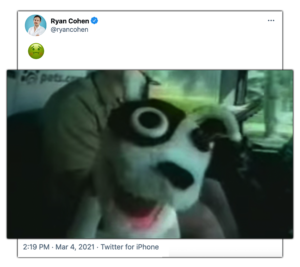