After market skeptics feared a “Black Monday” stock sell-off, GameStop closed up 2.63% and Ryan Cohen stuck chopsticks up his nose.

Ryan Cohen has always had a goofy side, sharing sometimes raunchy and mysterious images on Twitter, such as a poop emoji over a picture of a Blockbuster store or the stuffed bear from the movie “Ted” ripping a bong.

In a tweet sent out at 10:48 PM EST on July 19, 2021, the recently appointed Chairman of GameStop shared a photo of himself playing with chopsticks. Wearing a black tee with a pair of sunglasses hanging on the collar, the photo was captioned, “PG-13.”

Speculative investors were quick to draw assumptions as to what a deeper meaning of the tweet could entail, largely rooted in the odd text and the split chopsticks.

While PG-13 is typically known as a movie rating reserved for stronger-language movies by the Motion Picture Association film rating system, some interpreted this as a nod to Pg. 13 of GameStop’s Prospectus.

GameStop’s current prospectus, a disclosure document that describes a financial security for potential buyers, was filed on May 9th and utilizes page 13 to describe the definition of one unit of GameStop’s security. 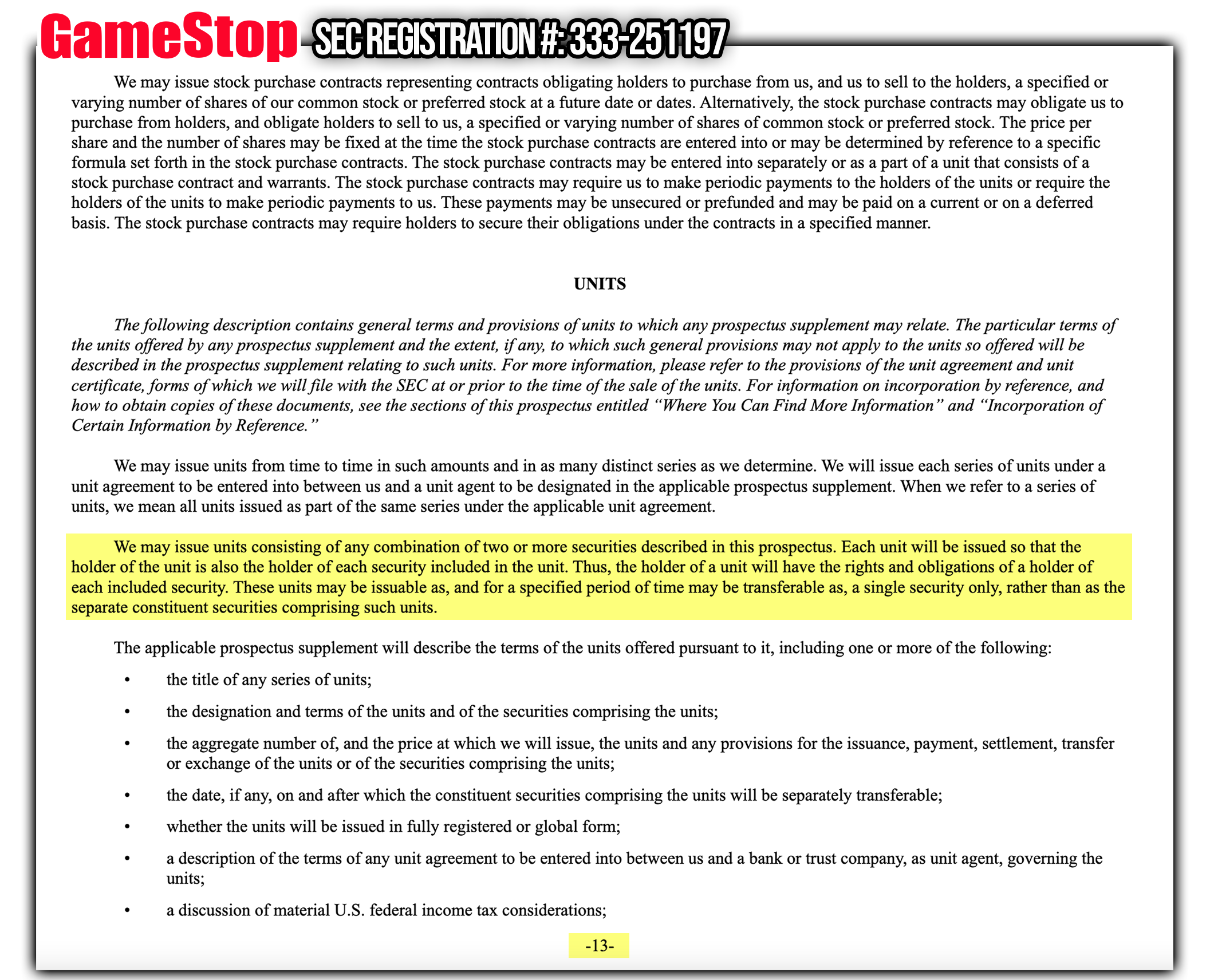 A Stock Unit is a bookkeeping entry representing an amount equivalent to the Fair Market Value of one Share, payable in cash, property or Shares. Stock Units represent an unfunded and unsecured obligation of the Company, except as otherwise provided for by the Administrator.

Some believe this describes details for navigating a stock split event, dividend, or mythical NFT-dividend.

It is important to note that while GameStop’s “NFTeam” has grown exponentially, the ever-sensationalized NFT dividend theory has little evidence to support it.

Presumptive GameStop investor and reddit user I_eat_bananna interpreted the tweet as Ryan indicating that “the split is right under our nose.”

The expression “under someone’s nose” is used to describe something that one fails to see or notice even though he or she should.

In a stock split, shares are divided up, which can be done for several reasons; most commonly to reduce the share price to appeal to a larger number of retail investors.

This often makes sense when a company’s stock has increased to a point where retail traders consider it an unattractive or unaffordable investment, despite a low or reasonable market cap. 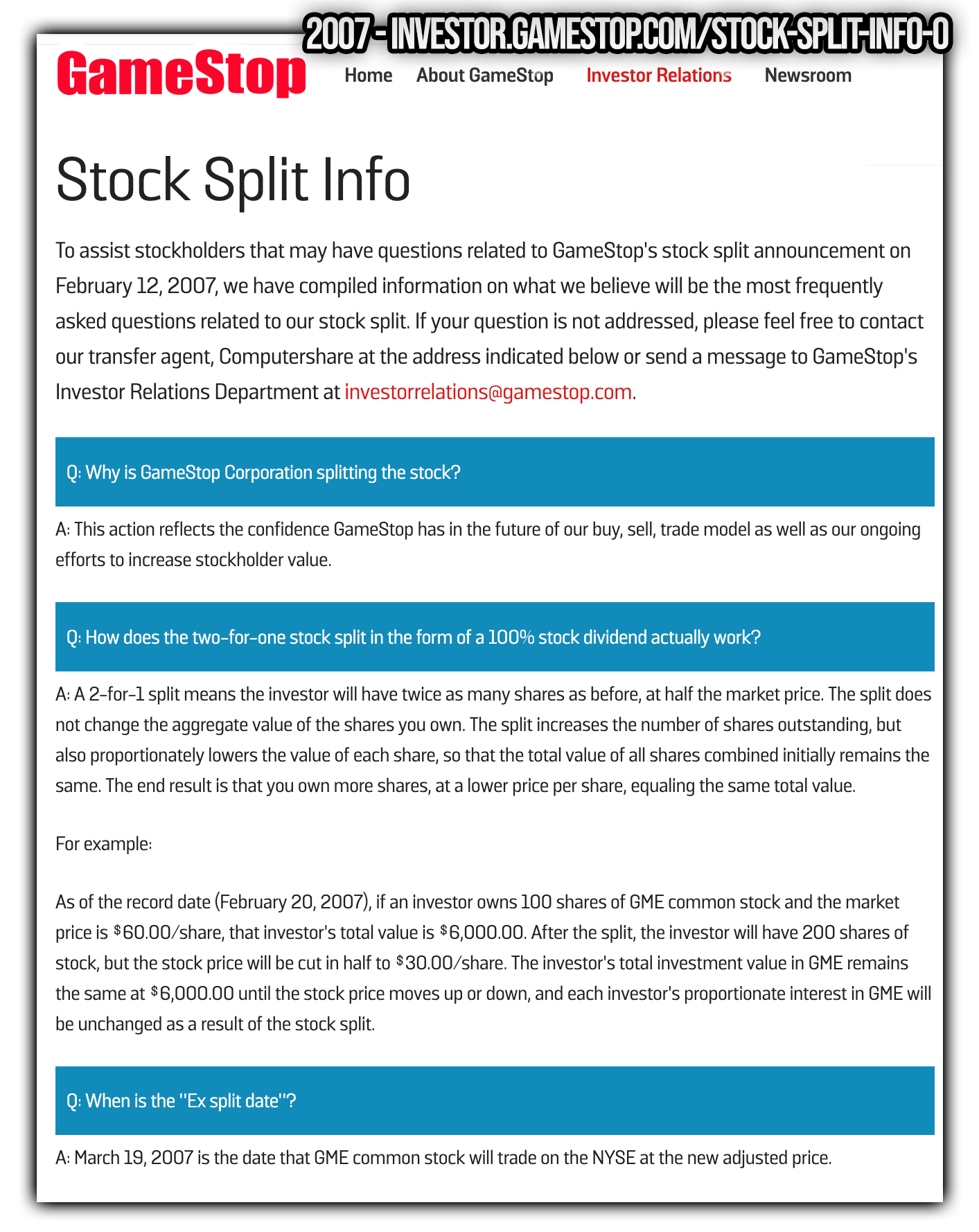 Information on this 2:1 split is still available on GameStop’s investor relations page. The page describes the impacts the adjusted price would have on the stock.

A 2-for-1 split means the investor will have twice as many shares as before, at half the market price. The split does not change the aggregate value of the shares you own.

In GameStop’s February 12, 2007 announcement of the two-for-one split, R. Richard Fontaine, GameStop’s Chairman and Chief Executive Officer at the time, describes the reasoning for the price adjustment. 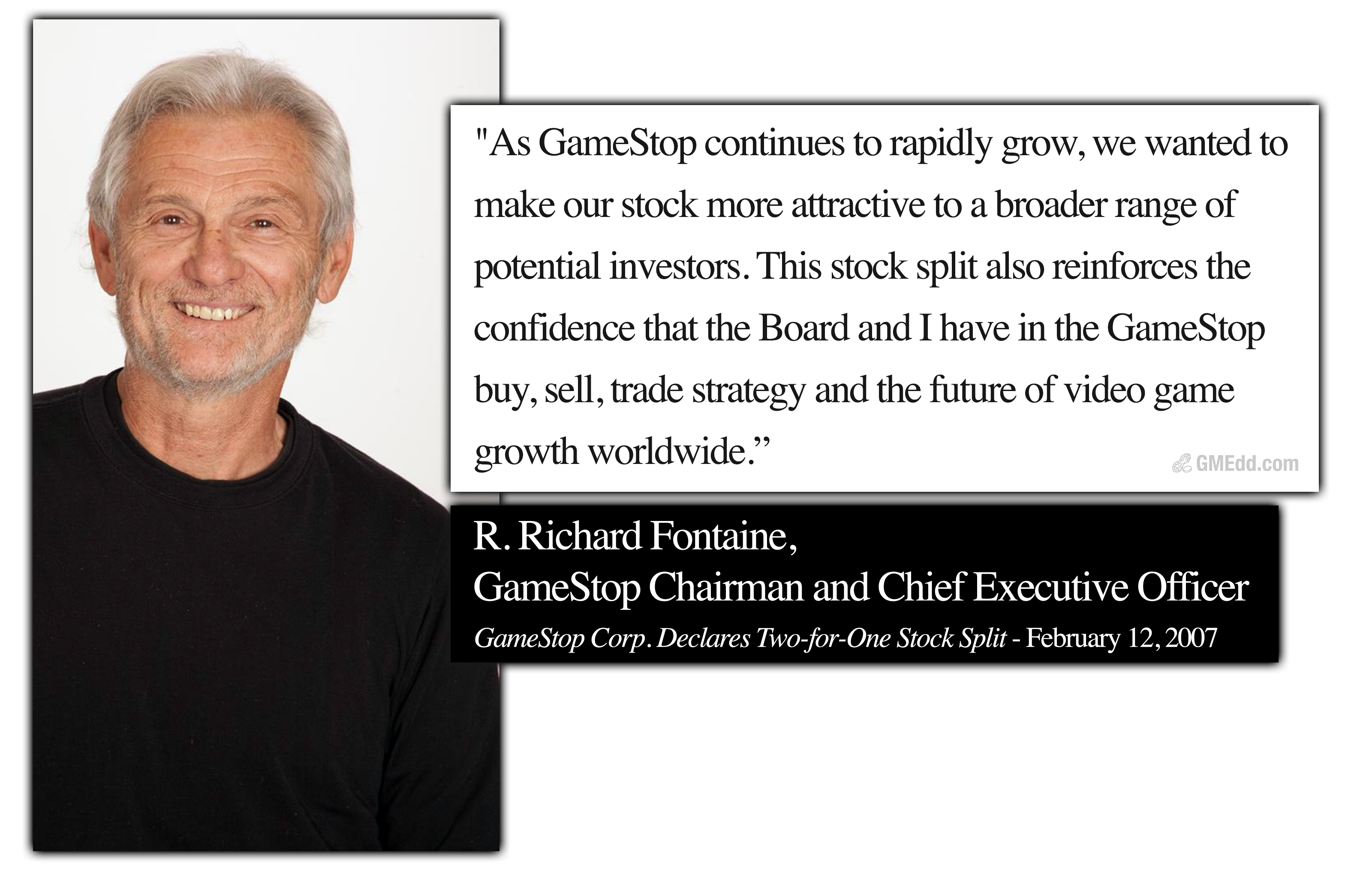 Growing rapidly and looking to appeal to a broader range of potential investors?

Any hint towards a future dividend or stock split is rooted in conspiracy; but what are investors if not speculators?

While no definitive reason can explain any of Ryan Cohen’s seemingly cryptic tweets, we can be reassured that GameStop’s Chairman enjoys Asian food and knows how to drive us crazy.