GameStop has revealed very little about what their Blockchain and NFT projects consist of. Upon finding Jordan Holberg, GameStop’s latest hire on LinkedIn, GMEdd was compelled to dig deeper.

In Jordan’s hiring announcement, he reveals personal nostalgia for Babbage’s, the company that GameStop used to be. The gamer describes his childhood visits to the brick-and-mortar retailer, alongside his decentralized ideals. 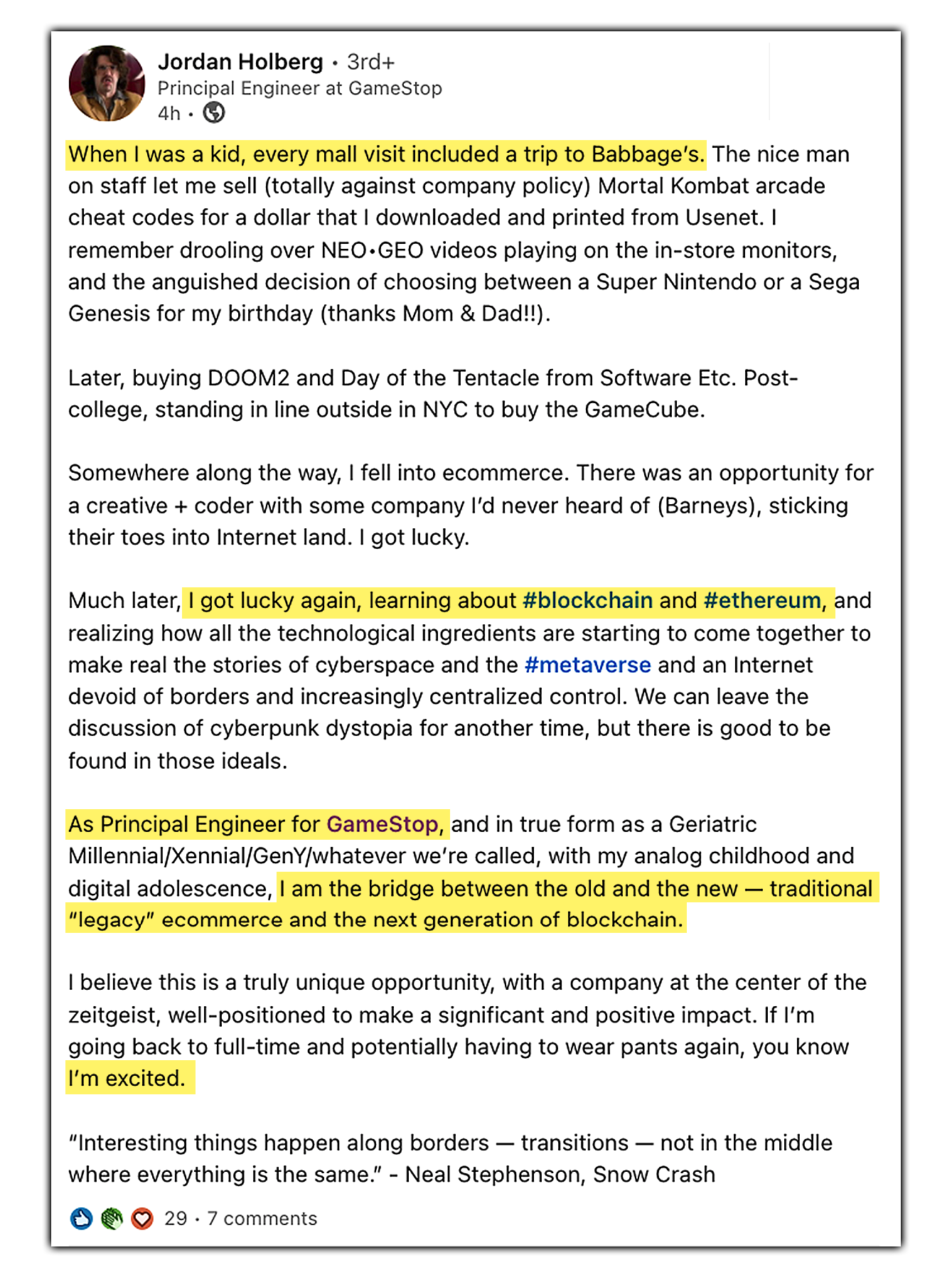 As Principal Engineer for GameStop,  and … with my analog childhood and digital adolescence, I am the bridge between the old and the new — traditional “legacy” ecommerce and the next generation of blockchain.

Holberg states that he believes working for the new GameStop is a truly unique opportunity, with a company at the center of the zeitgeist, well-positioned to make a significant and positive impact.

If I’m going back to full-time and potentially having to wear pants again, you know I’m excited.

The update makes it clear: Jordan is a nostalgic gamer with an impressive ecommerce and blockchain background.

The Principal Engineer shares his excited outlook for the future of GameStop, bridging “traditional ecommerce”, which he refers to as a legacy business, and blockchain, all wrapped up in what may be the most fun LinkedIn profile we’ve come across yet.

Jordan Holberg’s past indicates why he would be such a critical hire for the transforming gaming retailer. Jordan was Barneys.com’s first employee, granting him valuable experience working as a trailblazer in retail brick and mortar pivots to ecommerce.

Holberg states some of his major accomplishments while growing Barneys New York: 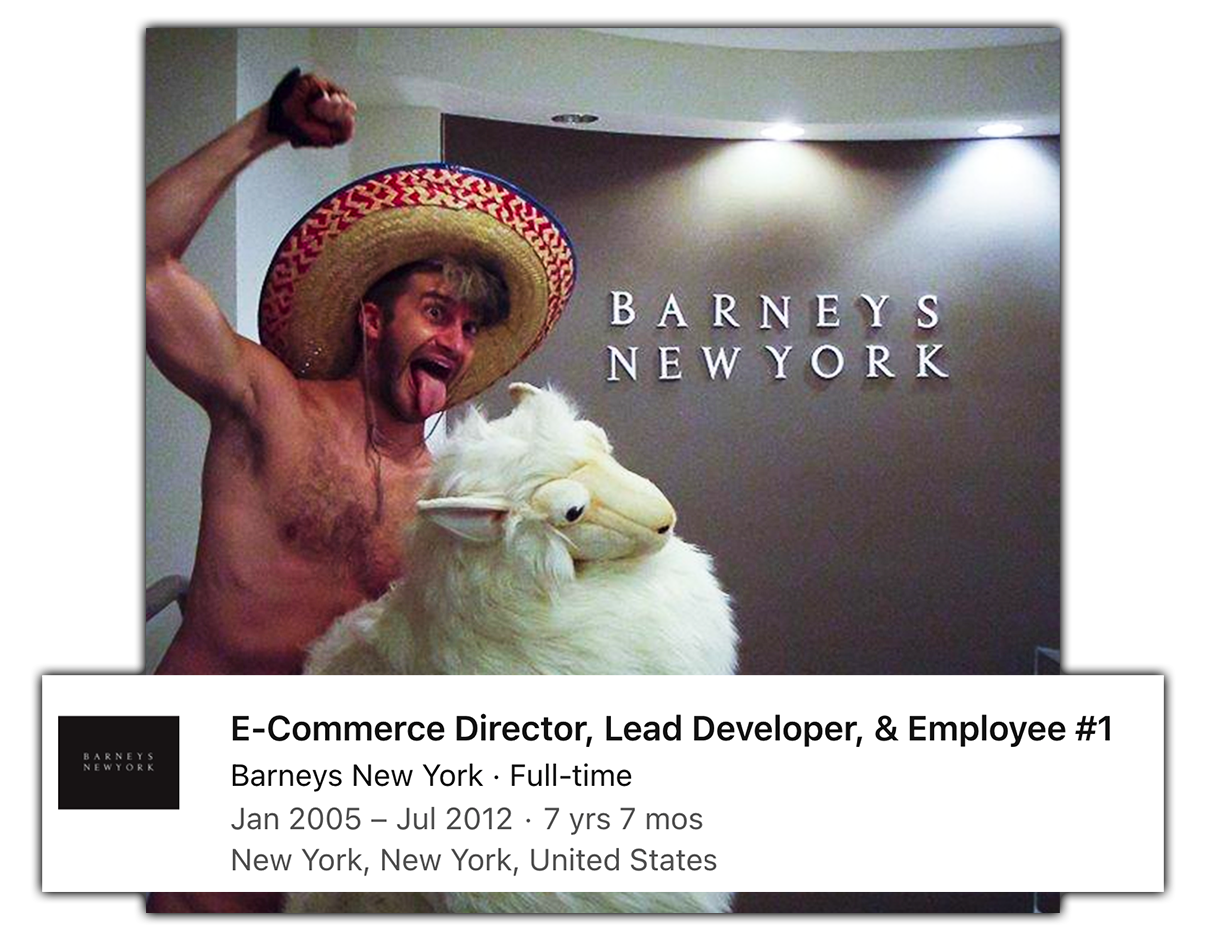 Jordan quipped in March, around the same time GameStop’s NFT project commenced, that his “head is full of use-cases and functionality NFT can unlock across finance, social media and gaming”.

He describes a project he had been building, named Hodlberg, that works to demonstrate his extensive knowledge of blockchain and NFTs. 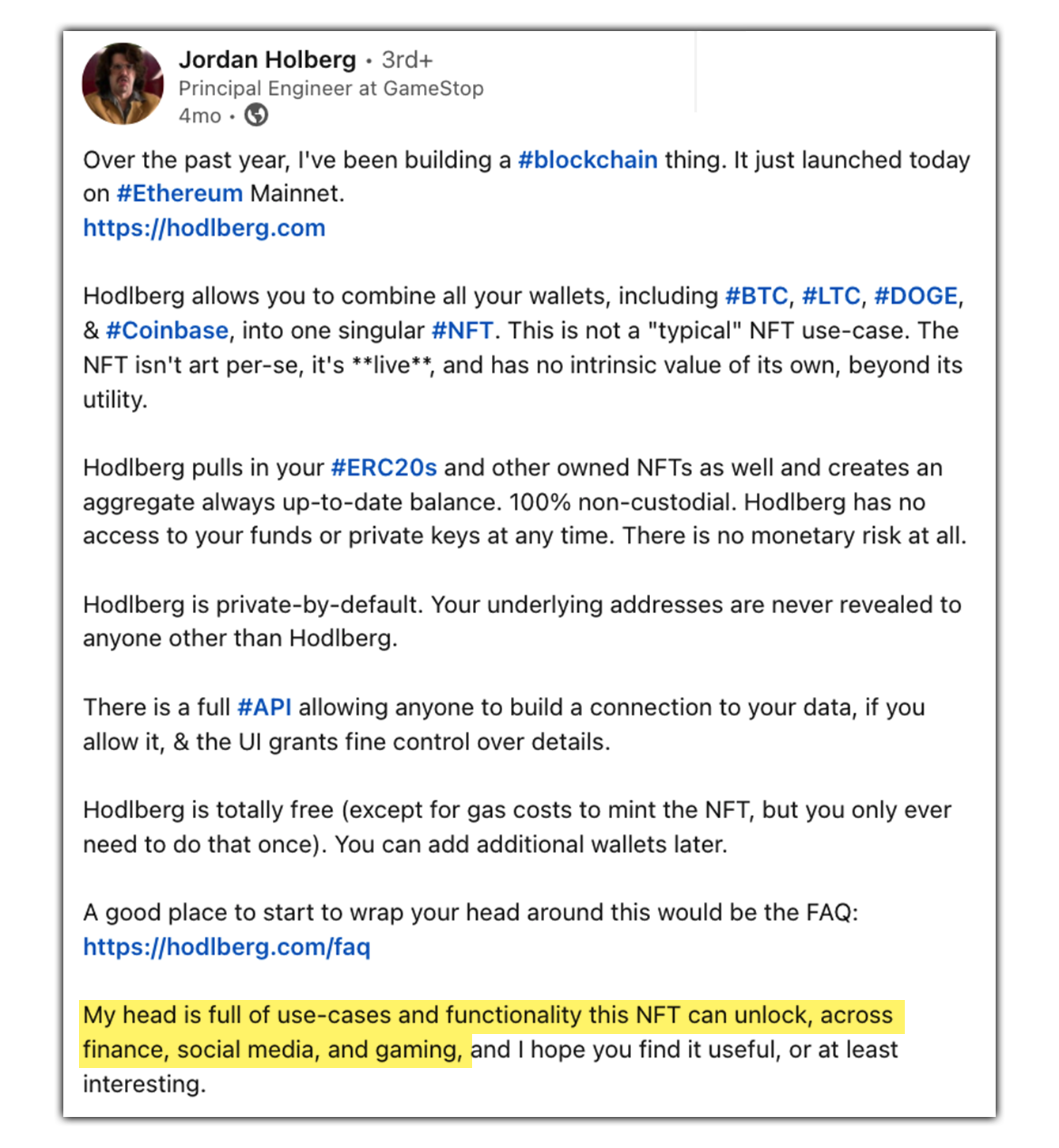 Hodlberg Financial’s Official FAQ page states it lets one “attest” their cryptocurrency holdings and mint a Non-Fungible Token (NFT) on the Ethereum blockchain. The minted Hodlberg NFT aggregates all attested wallet balances into one convenient token, without compromising privacy. The balance and token data aggregated into your Hodlberg NFT is always up-to-date.

This allows for some interesting possibilities, including among other things, most notably for GameStop, “a unique, evolving, in-game asset”.

According to his LinkedIn, Holberg attended NYU from 1999-2002, where he was actually a cat donning a red headband.

Seriously. If you ever needed proof we live in a simulation, here it is.

The resemblance to famous GameStop investor Roaring Kitty does not end there.

His love for feline friends dates back at least 7 years, to this photo in an office space. 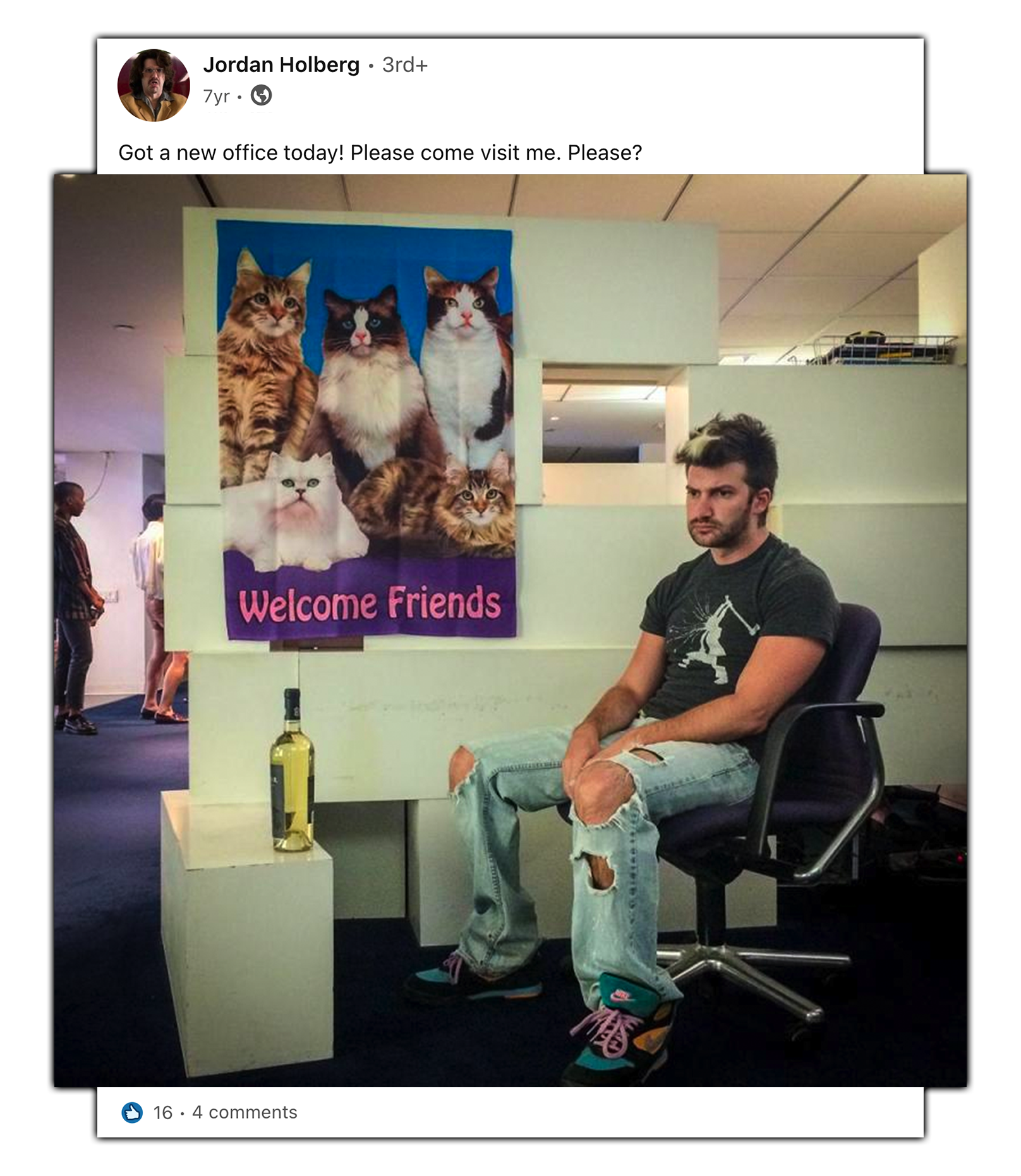 Jordan even has a personal website, jordanholberg.com, which features lolcatz language sprawled from top-to-bottom and a giant CLICK ME button in the famous impact font often used in meme culture.

When we saw this, we pondered what clicking the button will do. Could it reveal GameStop’s purpose for venturing into blockchain? 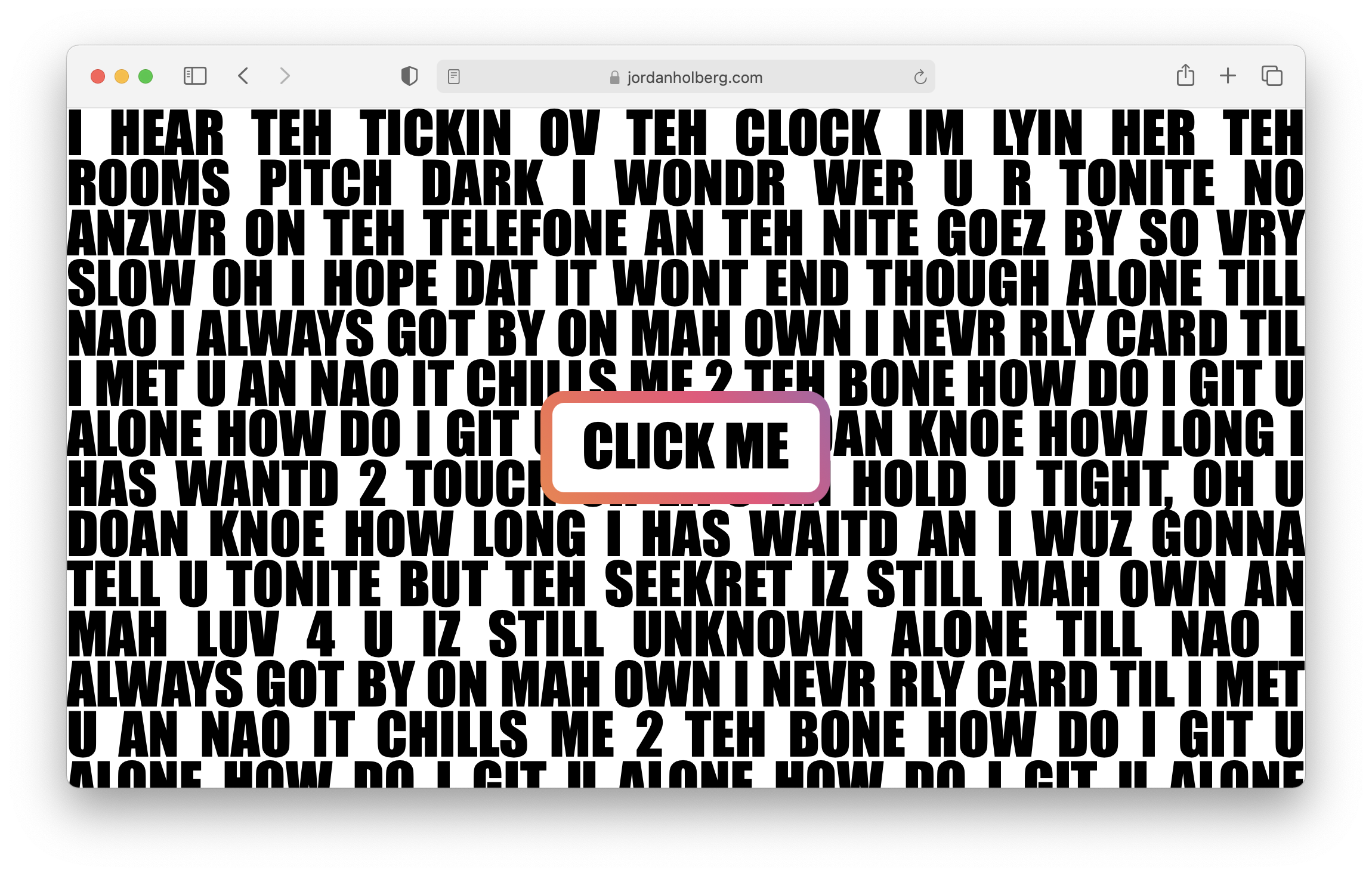 Well, we clicked it, and it just plays Holberg’s favorite music.

Here are the songs you will hear if you sit on his website for long enough:

Not only does Holberg’s site bring a sense of nostalgia to his work, his choice in music cannot be beat.

There is more to his homepage than you can see on the surface. Knowing his site will be crawling with speculative investors seeking clues and puzzle pieces, a quick search of the website’s code shows his humorous personality.

ooo look at you! so clever!

The headband-wearing, classic rock-playing, cat-loving blockchain dev should be a good fit for the GameStop NFTeam, who seem to have welcomed him with open arms, indicated by Finestone’s tweet.

Jordan also has his own YouTube channel with quirky, meme-worthy videos. Referring to himself as EvilJordan, he breaks societal norms for a business professional, posting a plethora of videos that range from him dancing shirtless to him playing PlayerUnknown’s Battlegrounds, and even his cats.

Two months ago, Holberg allowed himself to be interviewed by Demetri Ravanos for Barrett Sports Media, where he told of his philosophies towards NFTs and their usages, primarily towards sports.

The article was titled, Is There Money In The NFT Fad For Sports Media Brands?, published on April 19, 2021.

Demetri states that in order to figure out the answer to the question, he asked his friend Jordan Holberg for help. Jordan and Demetri went school together from third grade until the end of high school. Demetri also claims that Jordan once made him laugh so hard he peed his pants.

When Demetri asked Jordan what NFTs offer a sports fan, the crypto-fanatic responded that the first thing that pops into his head is community.

It’s dead-simple, at least in relative terms, to create a gated social community experience for NFT holders. It’s like a virtual ticket that isn’t forgeable, could be non-transferable, and has the potential to constantly make money for its issuer.

Jordan stated that he doesn’t have predictions on what will happen, but knows that NFTs have shown social media networks, company websites, and mobiles games are due for disruption.

In just one key hire, we can see, brick by brick, how Ryan Cohen’s road map to transformation is unfolding. Tallying up the over 70 key tech hires, the plan is in place.

GameStop’s latest Principal Engineer believes that cryptocurrency and NFTs have opened up a whole new world of what it means to be a consumer of entertainment and culture, and, for the moment, the sky’s the limit.

We can see that Jordan’s accomplishments in e-commerce and blockchain are stacked, and he already looks to be fitting right in with the existing blockchain division. He also loves cats, is nostalgic for GameStop, and lives to meme.

Despite being self-employed for almost a decade, Holberg is excited to return to full-time work. The decentralization geek believes that GameStop is a truly unique opportunity, with a company well-positioned to make a significant and positive impact.

Let’s see what he makes of it.