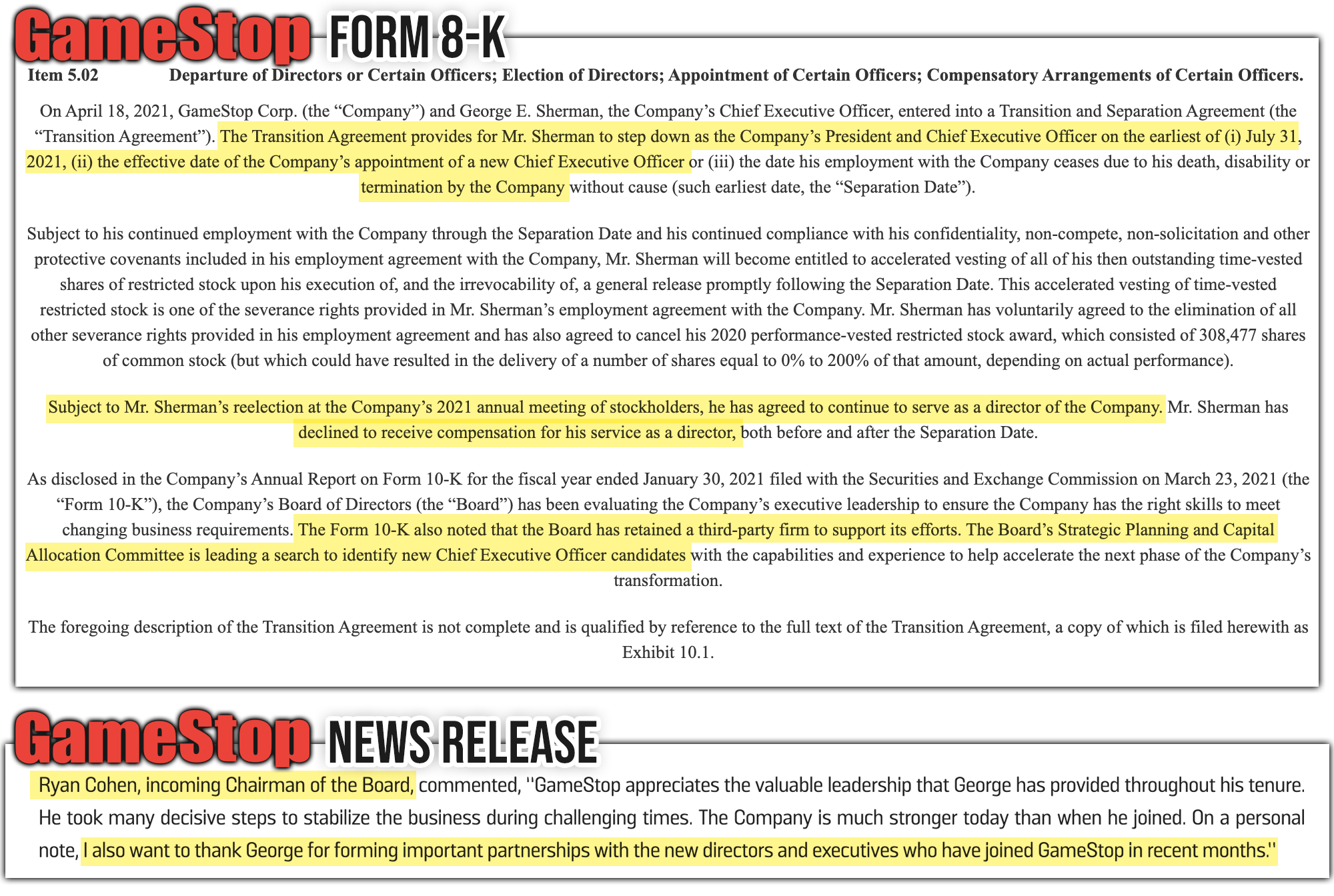 The Board of Directors thanked Mr. Sherman for his significant contributions since being appointed Chief Executive Officer in April 2019.

Most interesting of all, the GameStop board’s Strategic Planning and Capital Allocation Committee is leading the search to identify Chief Executive Officer candidates with the capabilities and experience to help accelerate the next phase of the Company’s transformation.

Who is at the head of this committee? Ryan Cohen. Other members include ex-Chewy executives Alan Attal and Jim Grube, whom Ryan Cohen chose as his board seats granted through the RC Ventures Agreement (Kurt Wolf of Hestia Capital was formerly on this committee, but parted ways with GameStop in early April).

Subject to Mr. Sherman’s reelection at the Company’s 2021 annual meeting of stockholders, he has agreed to continue to serve as a director of the Company. Following Ryan Cohen’s initiative, Mr. Sherman has declined to receive compensation for his service as a director, both before and after the Separation Date.

In the News Release, Ryan Cohen, incoming Chairman of the Board, commented,

GameStop appreciates the valuable leadership that George has provided throughout his tenure. He took many decisive steps to stabilize the business during challenging times. The Company is much stronger today than when he joined. On a personal note, I also want to thank George for forming important partnerships with the new directors and executives who have joined GameStop in recent months.

The Form 8-K also touches on George Sherman voluntarily agreeing to the elimination of all other severance rights provided in his employment agreement and has also agreed to cancel his 2020 performance-vested restricted stock award, which consisted of 308,477 shares of common stock.

I am very proud of what we have accomplished at GameStop over the past two years, including during the difficult COVID-19 pandemic. It has been a privilege to lead so many dedicated, talented individuals, who collectively possess tremendous passion for the gaming industry. We have helped bring stability and strength to the business, including by de-densifying our store footprint, reducing costs and debt, and driving e-commerce growth. I also want to take this opportunity to thank our Board for all of its collaboration and support.