After stealthily expanding from Texas to South Florida and Seattle, GameStop is now going for the home run.

While all eyes are on GameStop’s expansion into the metaverse, it’s still important to keep tabs on the physical world, where GMEdd has been tracking GameStop’s corporate footprint for months.

In order to understand GameStop’s forward-looking expansion, it’s important to refresh with some background.

Per an agreement with GameStop Corp. in January, Ryan Cohen’s RC Ventures was granted 3 seats on the company’s board as the Chewy co-founder had been urging the brick-and-mortar retailer to adapt to changing times.

Ever since, the company has operated largely in silence while building the foundation for a digital-first technology company that can compete with the likes of Amazon.

In May, GMEdd speculated that GameStop would be soon opening a new Florida location in a piece titled GameStop Hints at New Florida Office, which was later confirmed by GameStop in September.

Two months later, GMEdd published that the gaming retailer was also expanding out to the windy city of Seattle, which was later confirmed by a GameStop employee on Twitter in October. 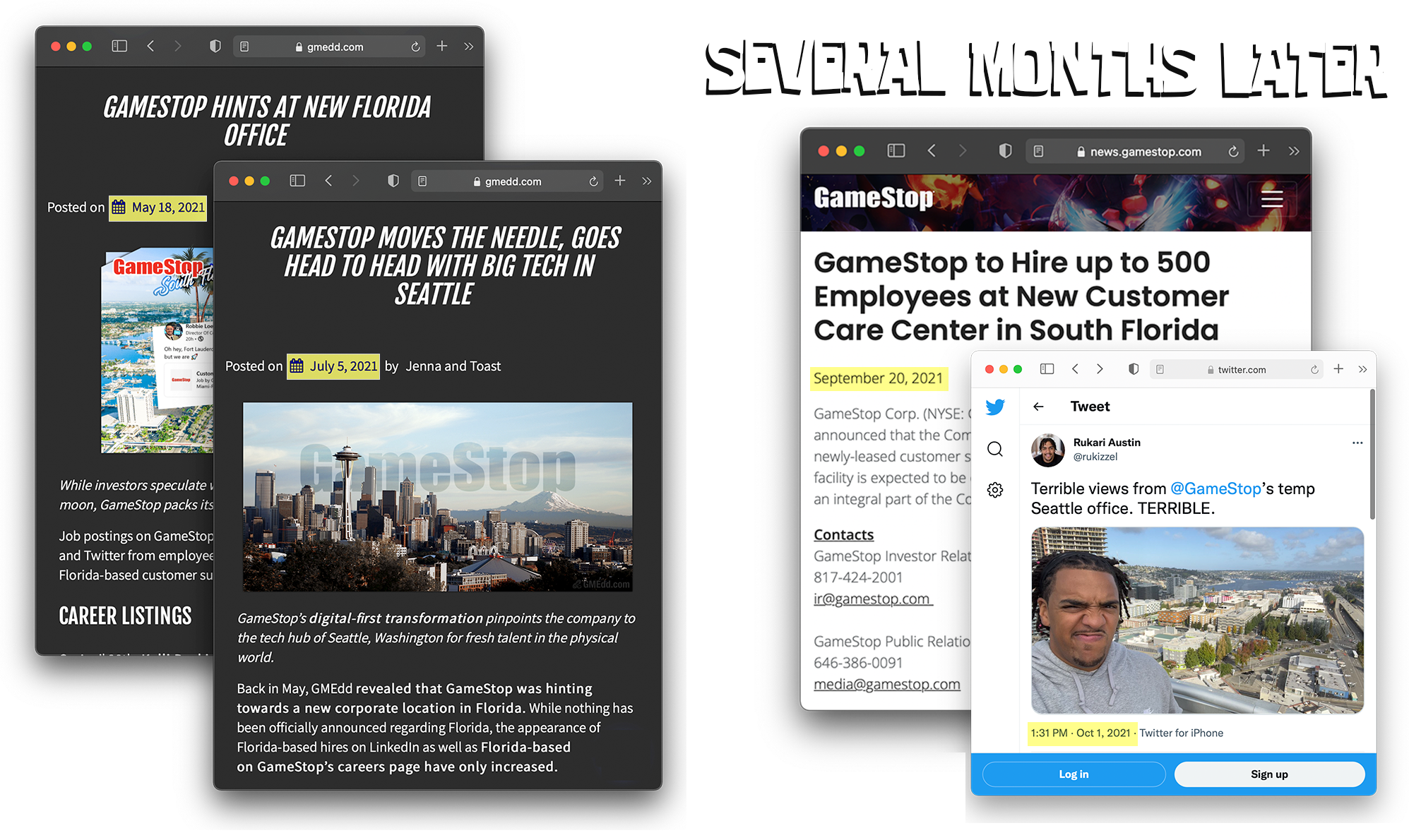 GameStop has yet to officially announce the offices in Seattle, but Rukari did.

The first clue to these expansions? Public job listings for remote positions with these cities as the location.

While these positions can sometimes be considered remote work, GameStop still utilizes a central office to foster a community atmosphere amongst the team.

In order to catalog GameStop’s latest filings and job postings, GMEdd.com has created the #gme-tracker bot, available for public viewing on the GMEdd Discord Server.

Recently, GameStop Careers has been flush with job postings for Boston, Massachusetts. There are currently multiple active openings in HR, marketing, finance, and tech categories. 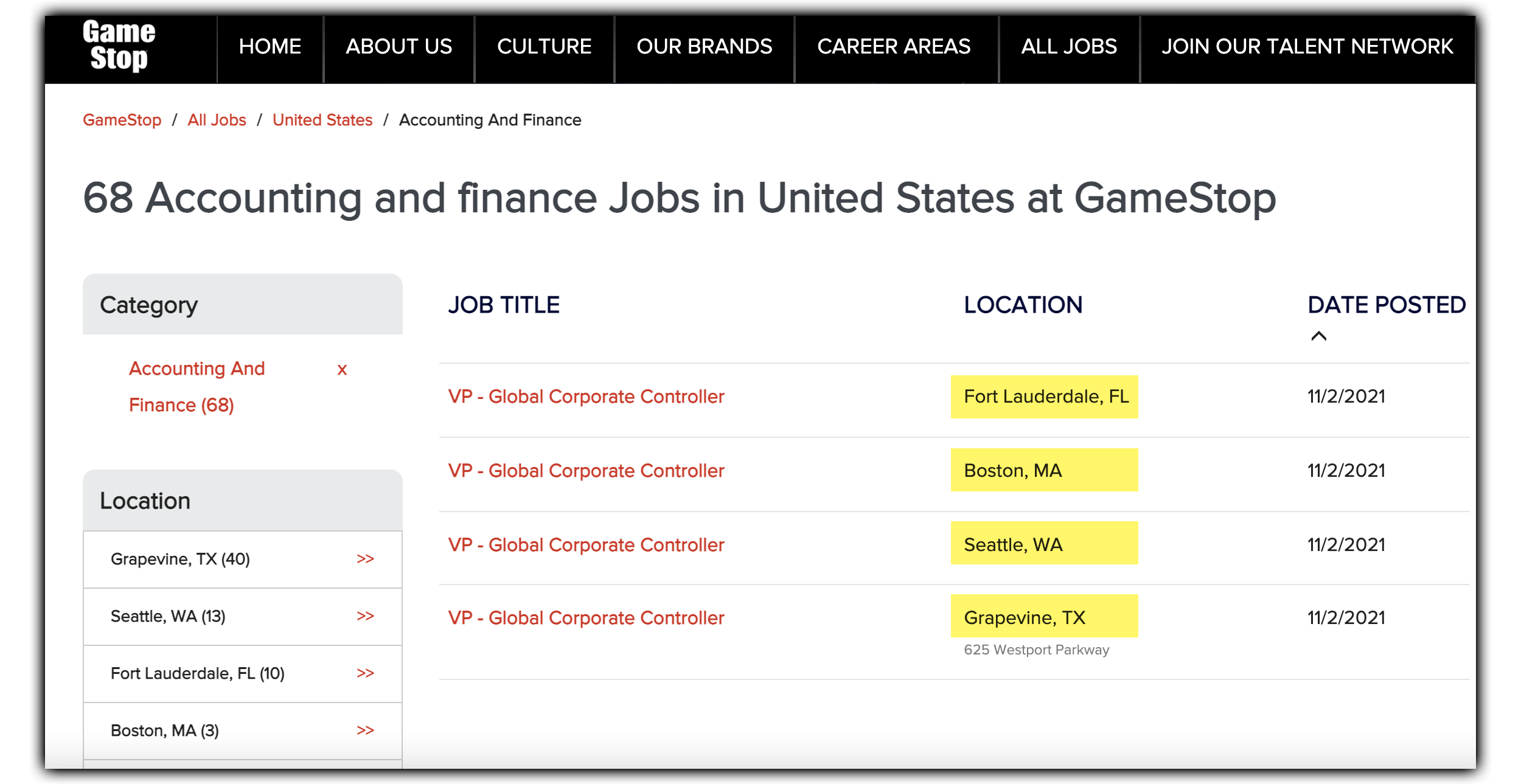 GMEdd’s full Tech Hire Database is located on our Report and Models page.

One job listing in the Human Resources category, searching for a Data Generalist in Boston, Massachusetts, states that the selected applicant would become an integral part of the Boston office. 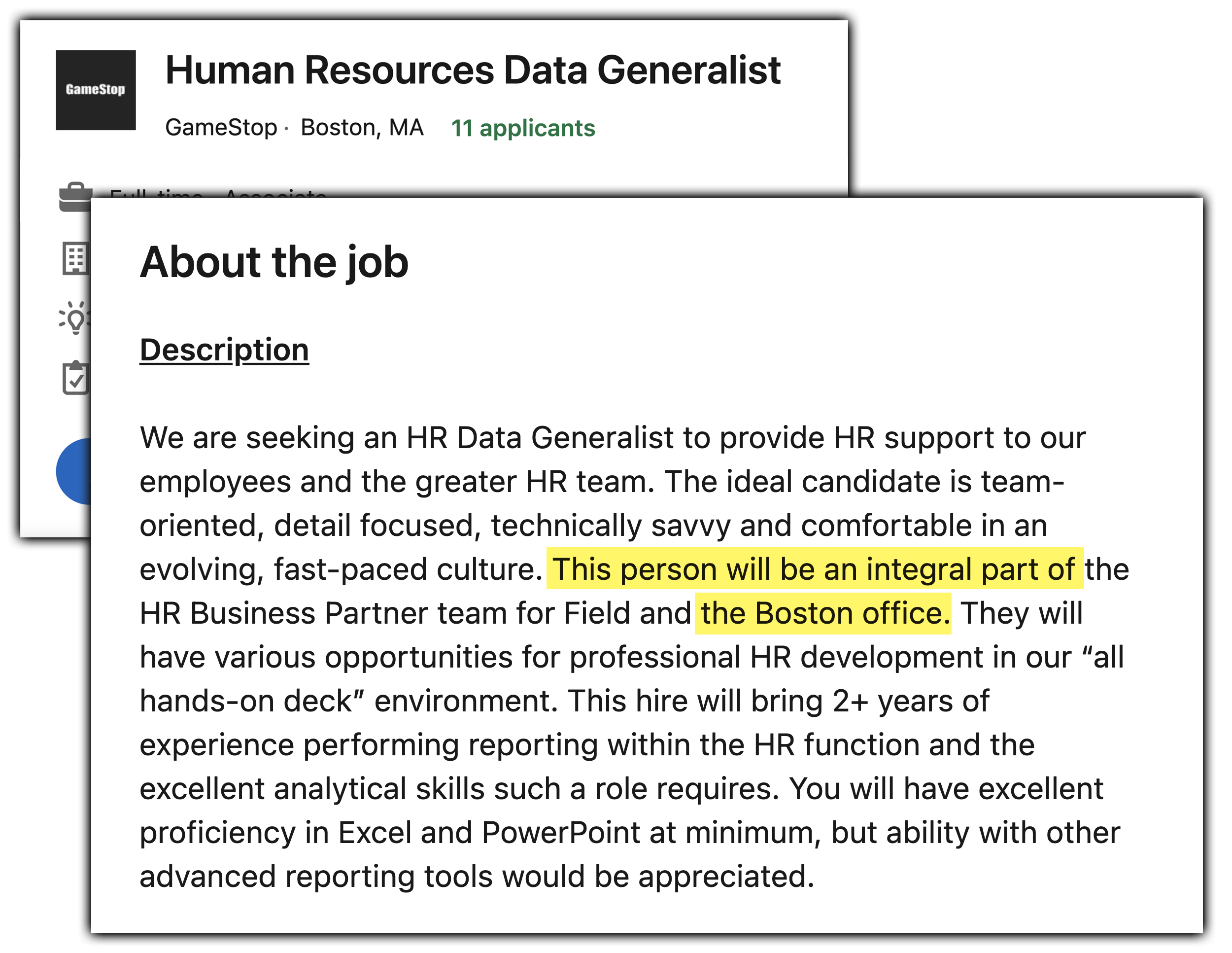 This one screenshot could be the whole story, but that wouldn’t be fun, would it?

This person will be an integral part of the HR Business Partner team for Field and the Boston office.

With the Boston office confirmed in a simple HR job listing, we can begin to speculate why the aspiring tech company is so interested in New England’s oldest city.

Three people with first-hand knowledge of his strategy said he plans to breathe life into the stores by investing in what customers want and improving how employees can serve them.

See Ryan Cohen to Revitalize Retail, an Inside Look for more on this piece.

The article goes on to say that Cohen, who co-founded Chewy in 2011, is planning to turn GameStop into the “Chewy of Gaming,” which should not be surprising to anyone who’s followed his actions thus far — some of the first big moves by GameStop under Cohen’s leadership were opening two new fulfillment centers in the same locations Chewy started.

Cohen is undaunted. He is seeking to repeat his success with online pet supplies retailer Chewy, which he sold to PetSmart for $3.35 billion in 2017. He wants to turn GameStop into a gaming and entertainment retailer or the “Chewy of gaming”, with lower prices, better selection and faster delivery times on online orders than its rivals.

With this year’s expansion, GameStop will retain their original corporate location in Grapevine, Texas, along with now adding the growing business-hubs of South Florida, Seattle, and Boston.

GameStop’s own Game Informer, the company’s in-house publisher of the latest in video game news, reviews, previews, podcasts, and features, is headquartered in Minneapolis.

Chewy, on the other hand, refers to itself as “dual-headquartered”, with headquarters in South Florida and Boston. It also has two other corporate locations: Seattle — which opened recently — and Minneapolis. 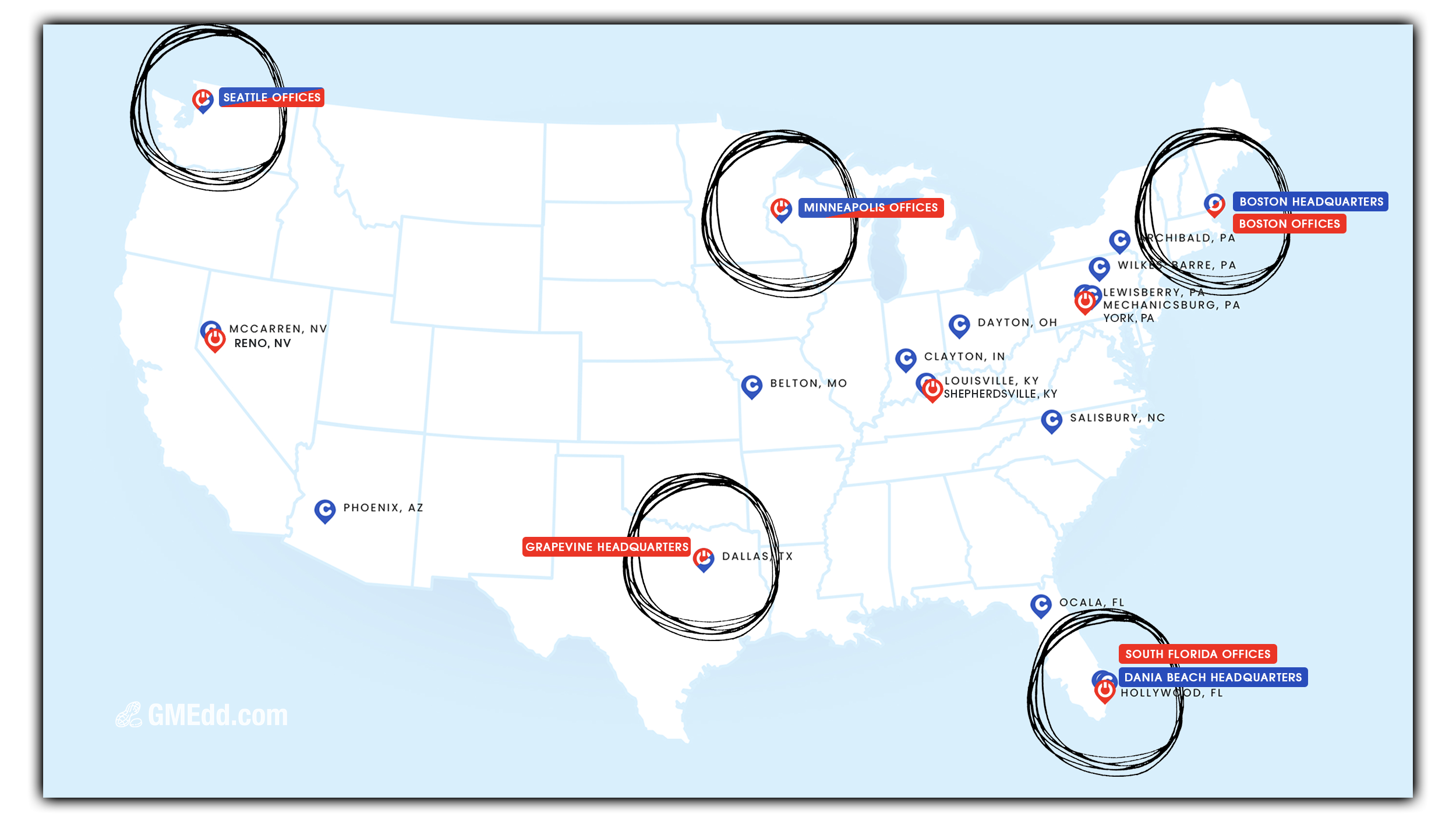 See an interactive version of the Chewy and GameStop Offices map here: Google My Maps.

Chewy’s primary headquarters are in South Florida and Boston, paired with new offices in Minneapolis and Seattle. Both companies have fulfillment and service centers across the United States.

It’s possible that GameStop has observed what’s worked for Chewy and is following in their footsteps. Expanding to the same locations as Chewy also makes poaching top talent from the pet food retailer easier.

It is worth noting that Boston is home to the first investor in Chewy, Larry Cheng, who has since joined GameStop’s board following an announcement in April.

On Twitter, Larry Cheng has advocated for Boston’s tech and veture capital community.

Cheng is passionate about the Boston tech and venture capital community.

Four years after Cheng’s investment in Chewy in 2013, when Ryan Cohen was asked by the Boston Globe why Chewy was expanding into Boston, the Chief Executive shared his interest in Boston’s talent.

Boston is an amazing technology hub and startup hub, with dozens of universities. There’s just a ton of talent. We looked at all of the major US cities when we were planning this office, and Boston was the most competitive — either equal to or better than anywhere else. 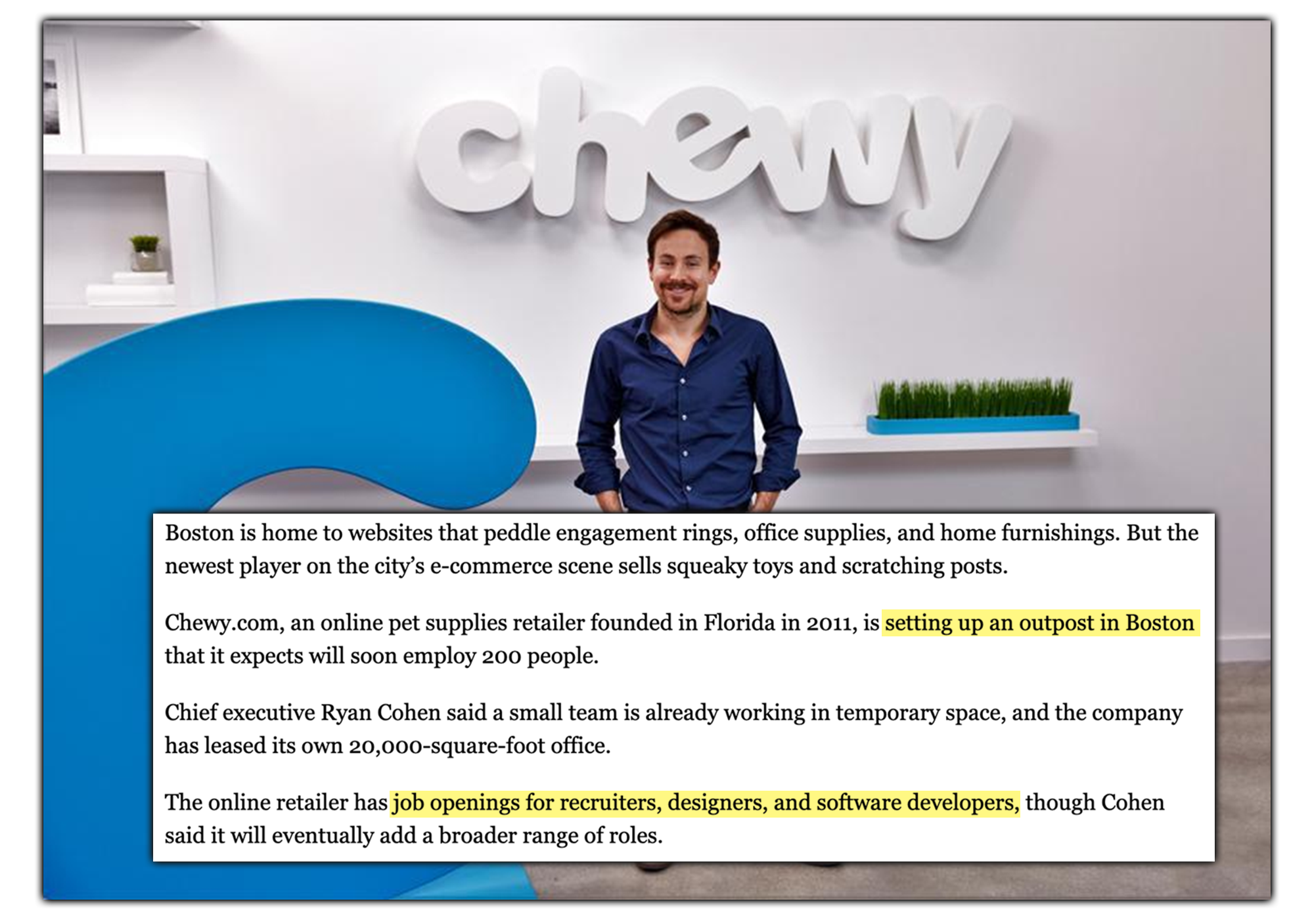 Ryan Cohen was interviewed by the Boston Globe in 2017.

Ryan Cohen also said that a small team was already working in a temporary space, and the company would move into a lease of a 20,000-square-foot office. It’s likely that GameStop has similar plans.

With GameStop already opening up two “Amazon-sized” fulfillment centers, rumored offices in Seattle and Boston, alongside hiring up to 500 employees at the newly-leased customer service center in South Florida, the company has expanded beyond the expected and GameStop’s next trajectory might just be the moon.