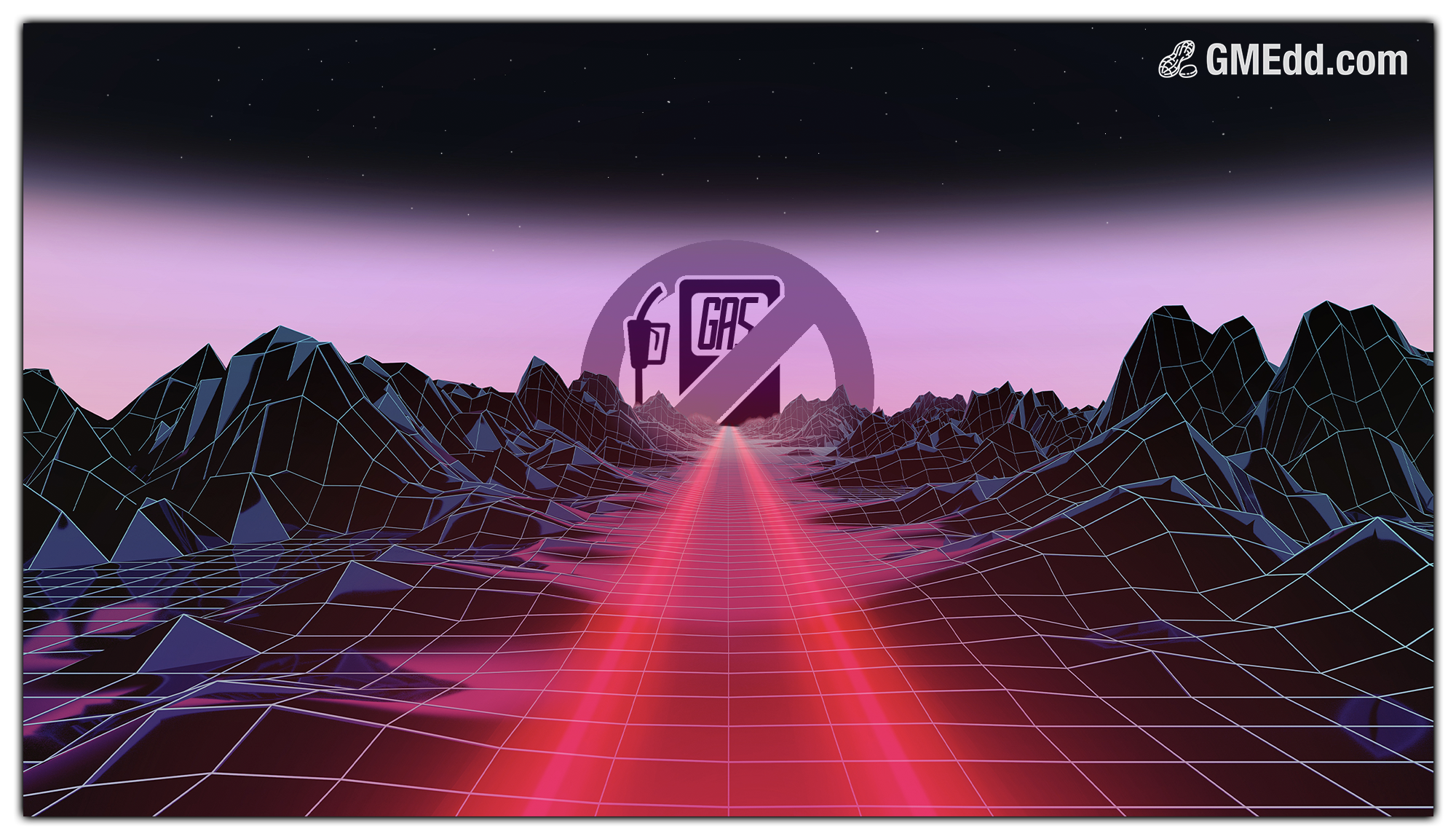 Prior to this, GMEdd.com had published digital breadcrumbs leading to that same point, detailing how Loopring has the technology that GameStop would require to bridge traditional e-commerce and blockchain and engineer the revolution of gaming.

You know the drill. Read those posts first, then come back. Actually, you’ve probably read them already, considering GMEdd.com crashed amid all the traffic and LRC went up 58.5% today. You’re welcome, Loopring. Sorry if we startled you.

Nobody Rides for Free

Amabile states that, “the process was not easy,” and that it was eye-opening considering how traditional e-commerce has embraced a one-click/tap checkout experience. 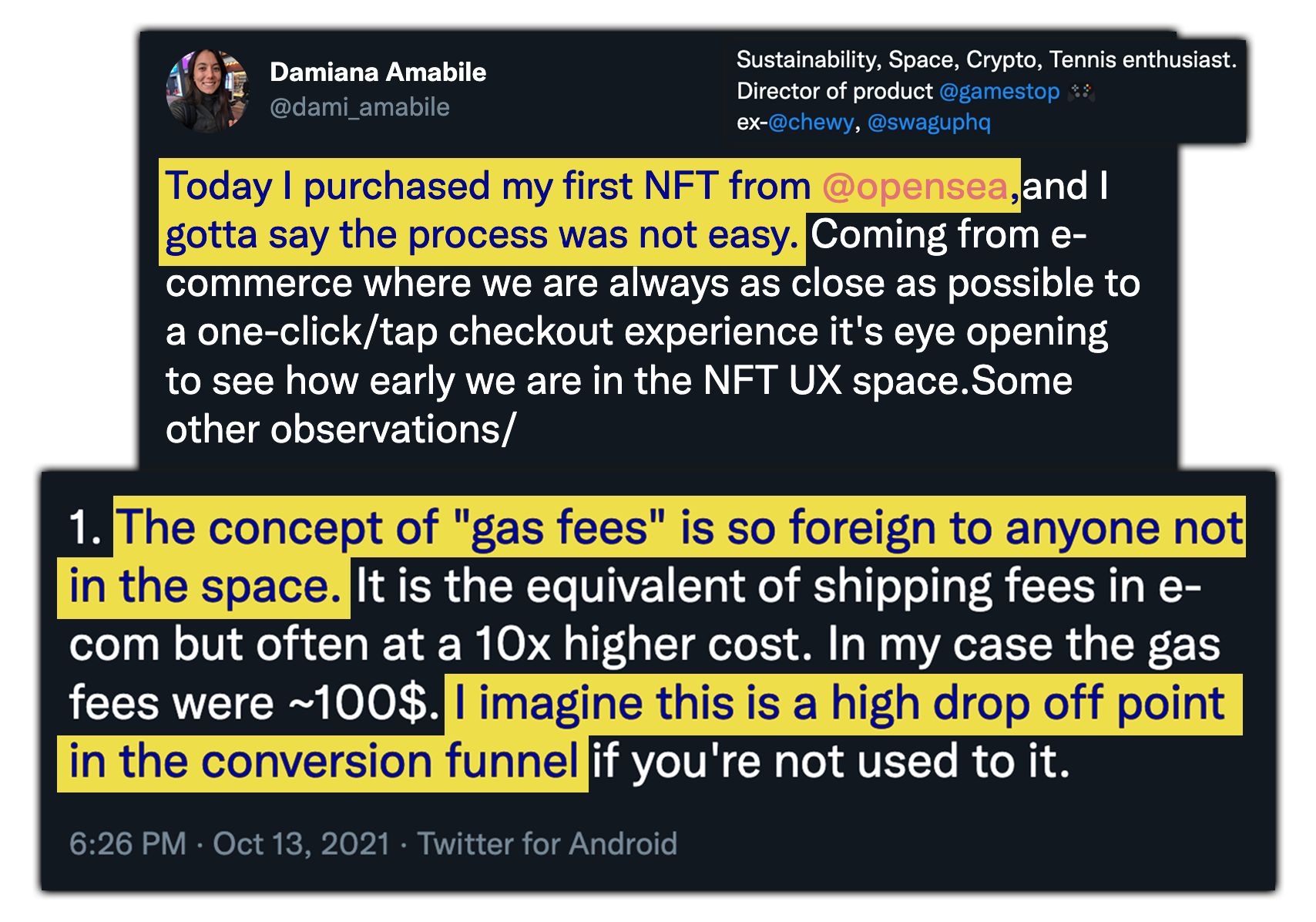 The GameStop Director of Product’s first complaint about OpenSea was that the concept of “gas fees” is so foreign to anyone not in the space. She imagines this is a high drop off point in the conversion tunnel.

“Gas fees” are the transaction fees that users pay on a blockchain protocol to have their transaction executed. The system works on a standard supply and demand mechanism.

If there is more demand for transactions, users will be forced to pay more to have their transactions processed quickly and efficiently. Currently, there’s plenty of demand.

High gas fees can be regarded as one of Ethereum’s biggest inhibitors to growth, with little desire for users to complete trades that often cost more than what they’re worth. 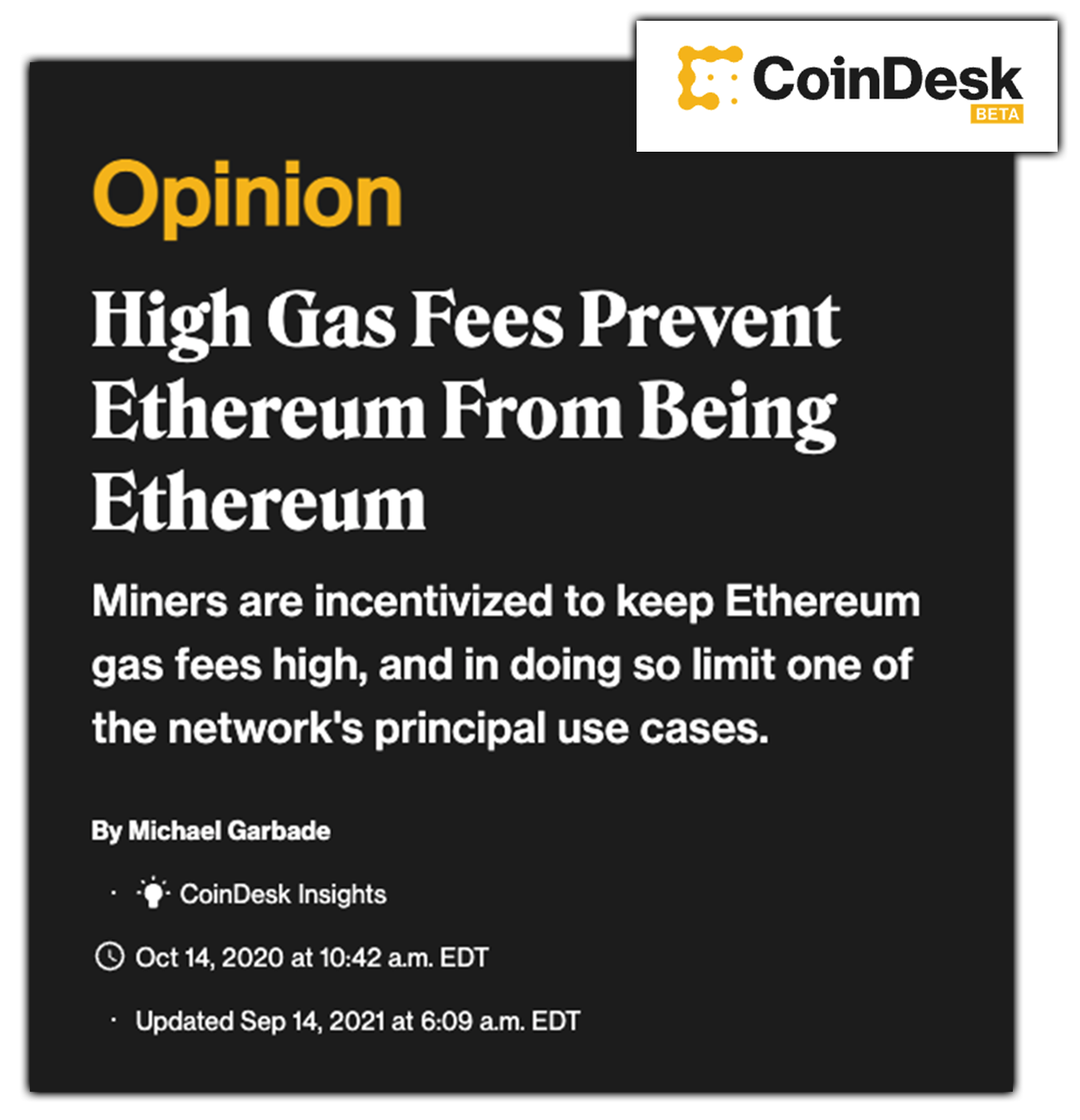 High gas fees have plagued Ethereum for over a year.

In a CoinDesk Opinion story from October 14, 2020, former Amazon executive turned CEO of a blockchain education company Michael J. Garbade writes that High Ethereum gas prices make it impossible for ERC-20 projects to run any microtransaction payments on Ethereum, defeating the idea of using the Ethereum network for one of its principal use cases.

Garbade explores one potential solution: zkRollup technology, stating that the trustless protocol from zkSync was, at the time, the most efficient answer. 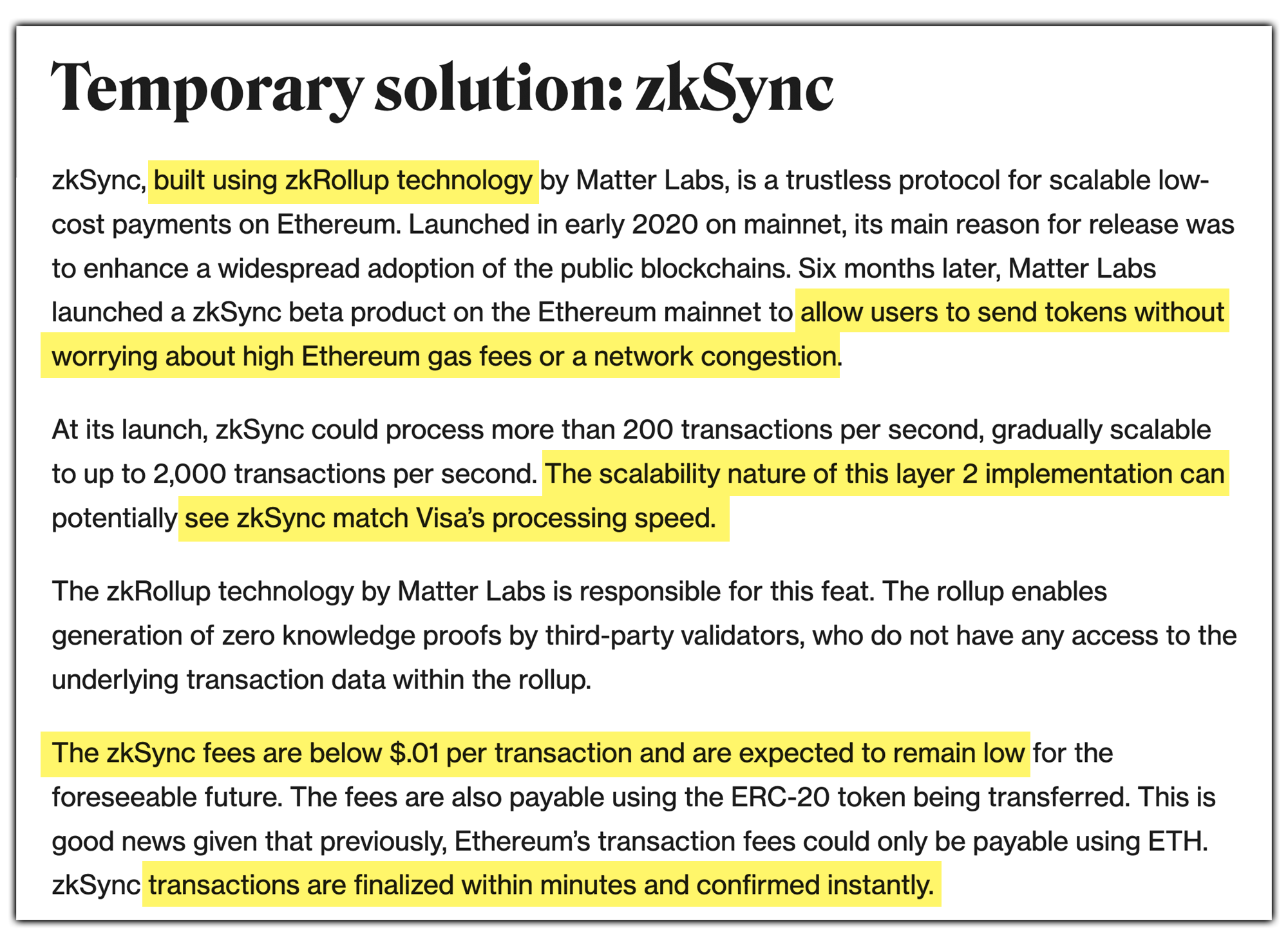 While there are several companies that have built ETH Layer 2 protocols using zkRollup technology, Loopring has since emerged as one of the most advanced and capable of mass-adoption.

Loopring, we’re not done yet

Loopring states that one major advantage of being application specific is that the protocol can optimize Loopring’s L1 footprint to the extreme as opposed to other Layer 2s.

This means Loopring L2 is much more scalable, faster + less expensive to use than other general purpose Ethereum L2s.

If you’re confused, Loopring’s Head of Community Byron Wiebe can frequently be found answering questions from LRC holders and curious GameStop investors alike on Loopring’s Discord server (to the best of his ability given the circumstances). 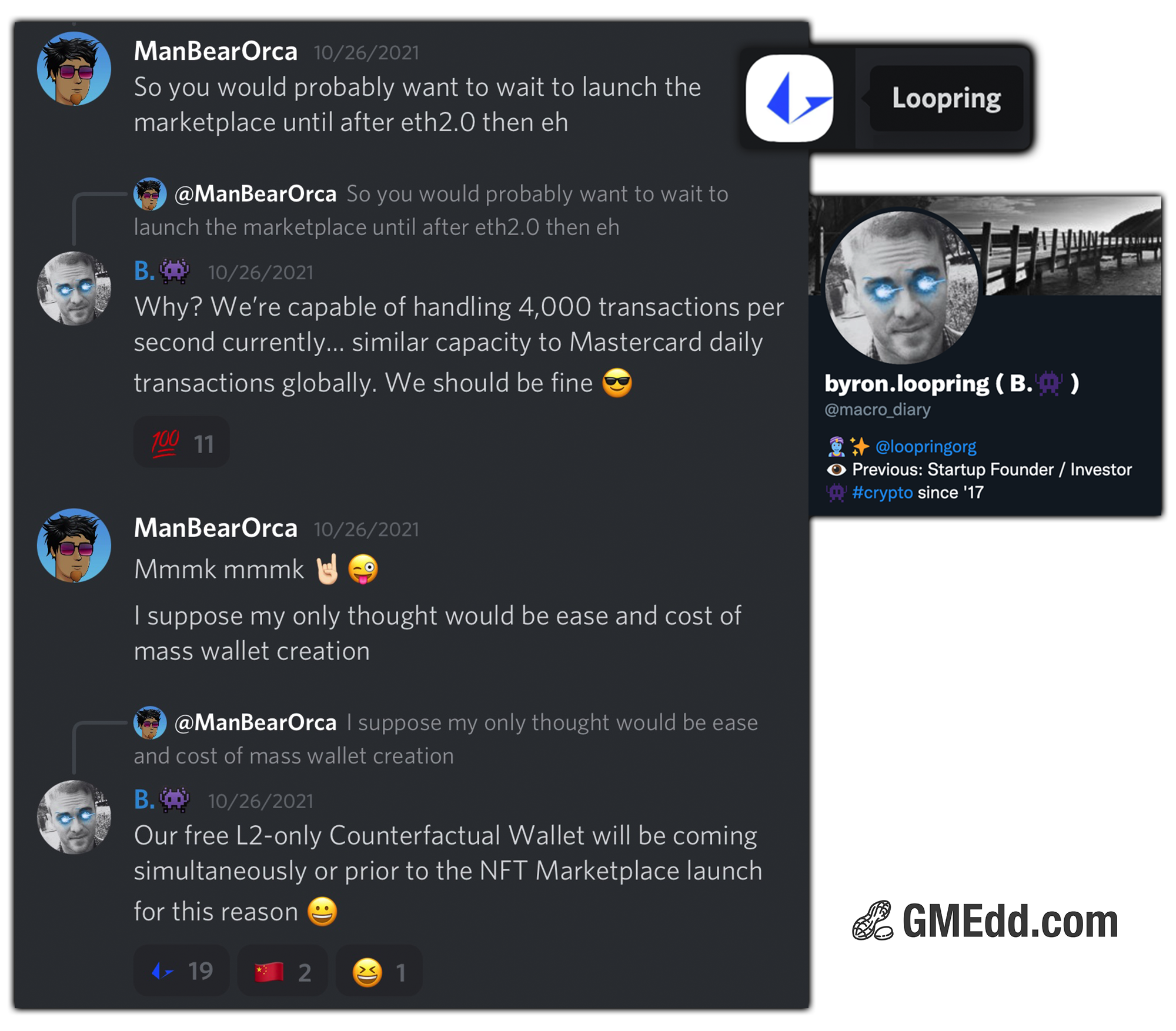 Byron answered some questions from ManBearOrca on October 26th.

When asked about delaying the launch until ETH2.0 is live, Byron goes on to state that Loopring’s technology is already capable of handling 4,000 transactions per second currently, “similar capacity to Mastercard daily transactions globally.”

Byron also states that Loopring’s free Layer2 Wallet will be launching simultaneously or prior to the NFT Marketplace, allowing for easy adoption amongst those who aren’t used to crypto.

In a LinkedIn post today, Loopring has added some commentary on their Q3 2021 Quarterly Update, which was published by Byron.

Loopring announced that they will be enabling NFT support, “allowing anyone to mint and trade NFTs instantly and gas-free.” 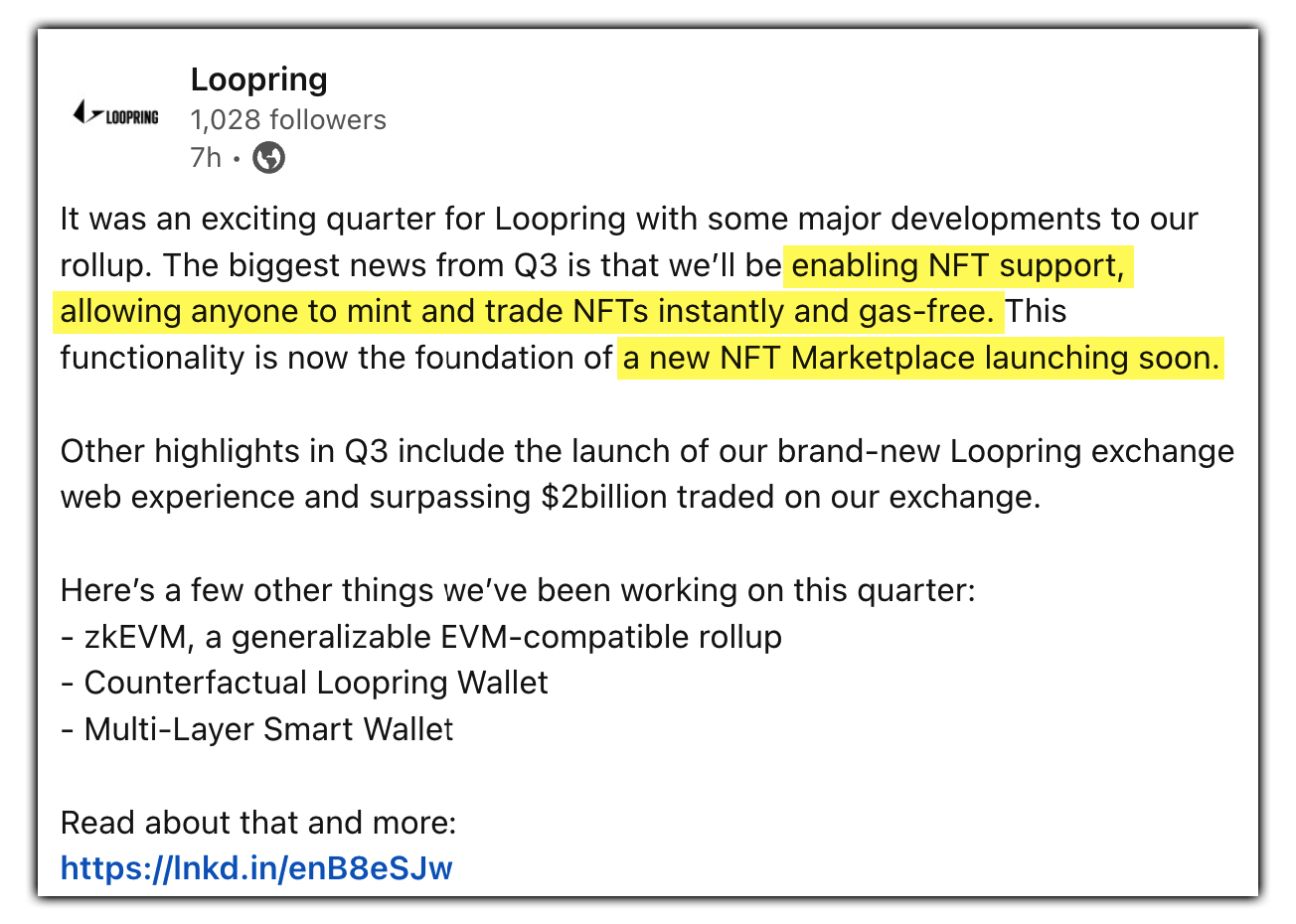 Loopring shared this post on LinkedIn on October 28th 2021.

Loopring goes on to state that this functionality is now the foundation of a new NFT Marketplace launching soon.

With Damiana Amabile’s major gripes with NFT transactions solved by Loopring, the gap between traditional e-commerce and blockchain could be bridged.

It’s now beyond a reasonable doubt that GameStop has found a partner for their venture into the future.

We just wouldn’t be so sure that Loopring is the only one.