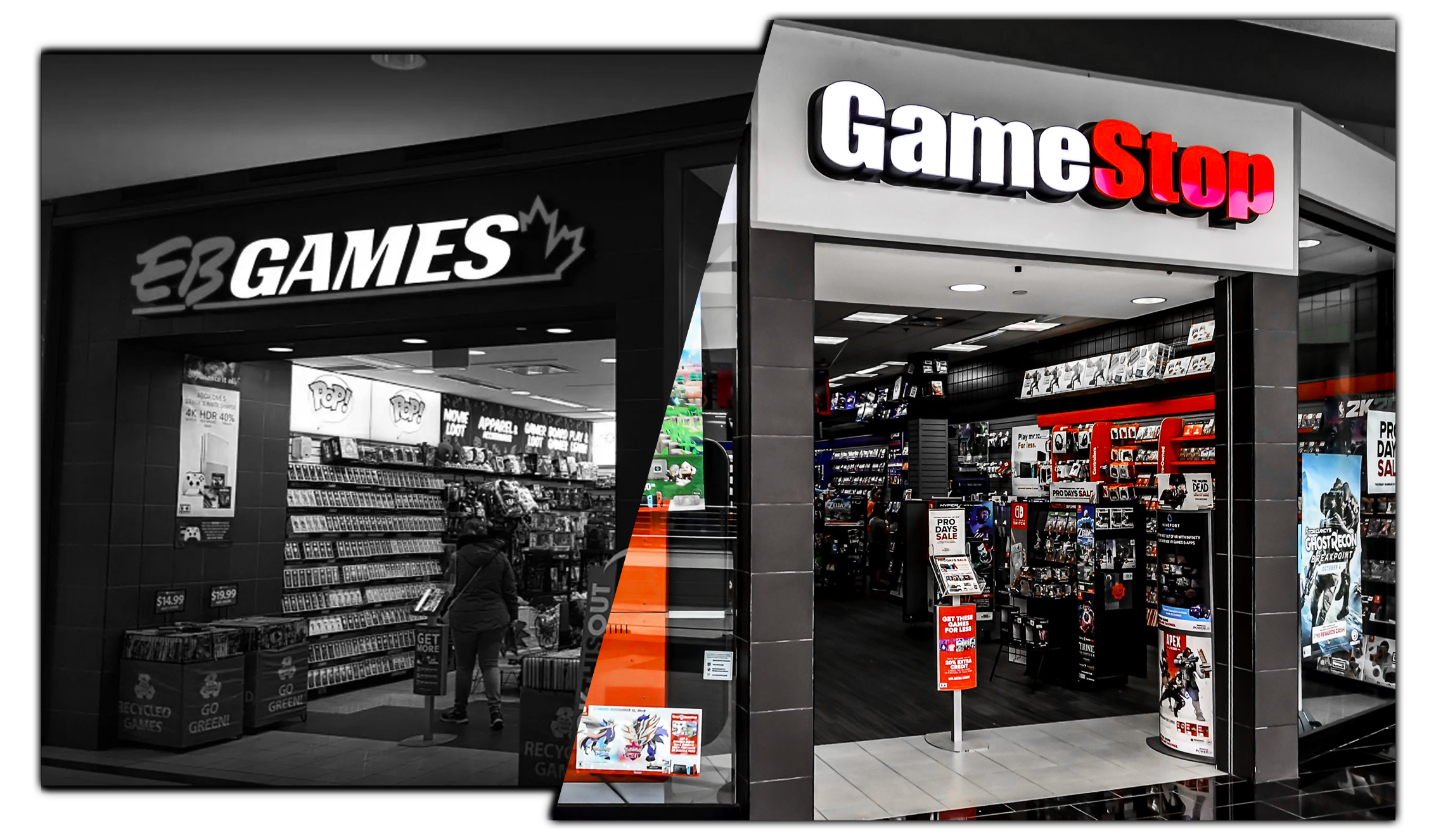 On Wednesday, July 28th, GameStop Corp. announced that the Company plans to rebrand existing and future EB Games in Canada.

By the end of this year, EB Games’ Canadian locations and online store will assume the GameStop brand and name. The decision aligns with Ryan Cohen’s plans to revitalize retail. 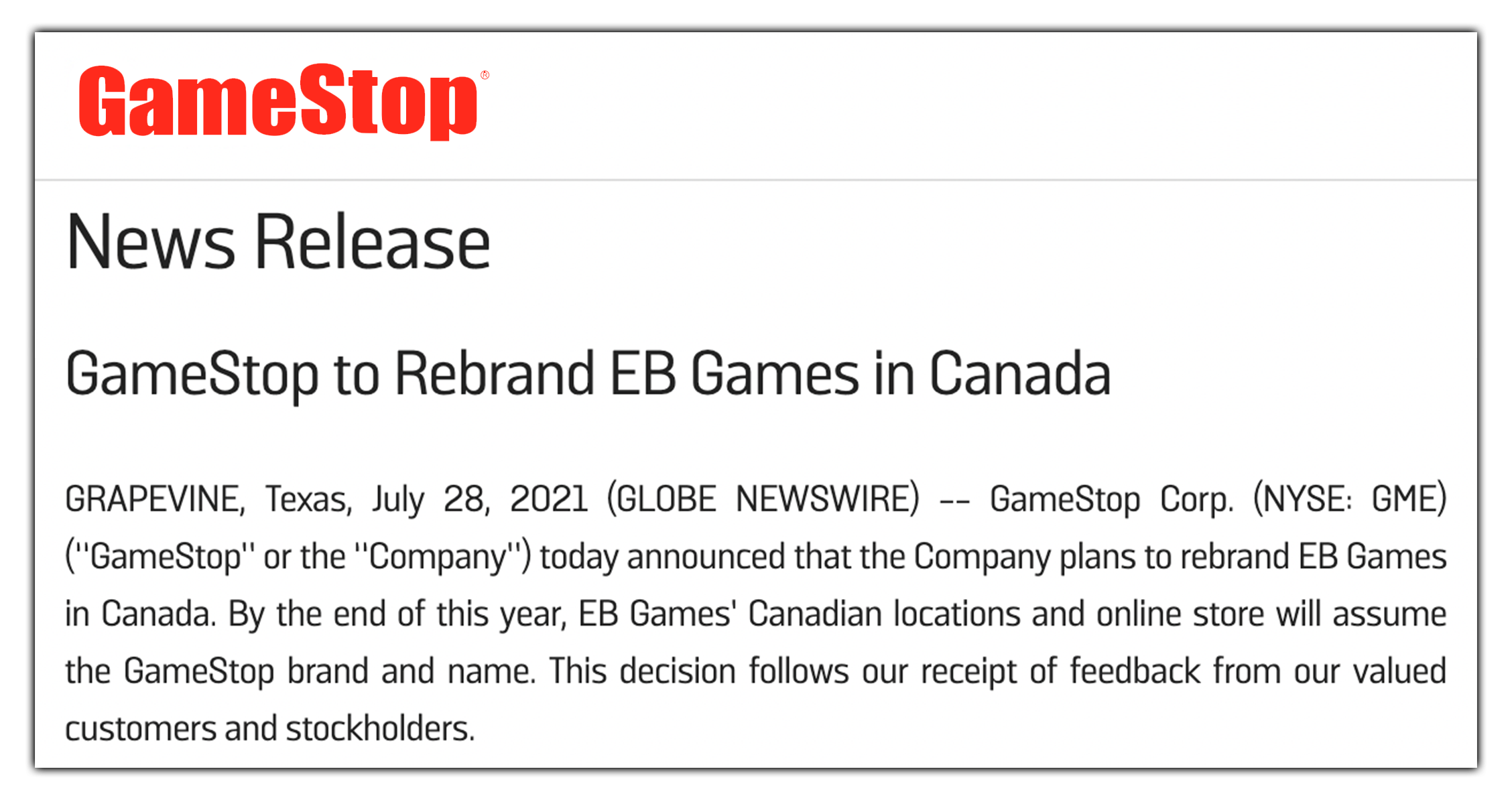 GameStop’s Annual Report reveals that as of January 30th, 2021, GameStop has 253 locations in Canada, making up 15.58% of their international store base.

GameStop Corp. has disposed of 46 brick-and-mortar EB Games locations in Canada in over a year, citing data from January 30th 2021.

On Sunday, GMEdd.com released a piece titled Ryan Cohen to Revitalize Retail, speculating that GameStop could use the stock market frenzy in January as the perfect consumer awareness campaign to rebrand international EBgames locations into GameStop stores.

The stock market phenomenon surrounding GameStop shares that shook financial markets in January 2021 can work as a groundwork for the perfect, free, consumer awareness campaign required to rebrand international stores, such as EBgames, into a cohesive GameStop identity. [GMEdd.com, July 25th 2021] GameStop today announced the continued expansion of its North American fulfillment network and entry into a lease of a 530,000 square foot facility in Reno, Nevada, which is expected to be operational in 2022.

GameStop states that a new presence in Reno, Nevada will position the company to grow product offerings and expedite shipping across the west coast. This expansion follows GameStop’s entry into a lease of a 700,000 square foot facility in York, Pennsylvania.

When Ryan Cohen was asked about fulfillment at Chewy during his TechCrunch interview in 2019, the founder discusses how his leap of faith started by the opening of a fulfillment center in Pennsylvania and then one in Reno, Nevada.

The Rise of Chewy to Prove the Core Value of Any E-commerce Product by Ally Nguyen states that a year after that first breakthrough in Pennsylvania, Cohen launched Chewy’s second building in Reno, Nevada, and that second time just seems like the one-hundredth already. 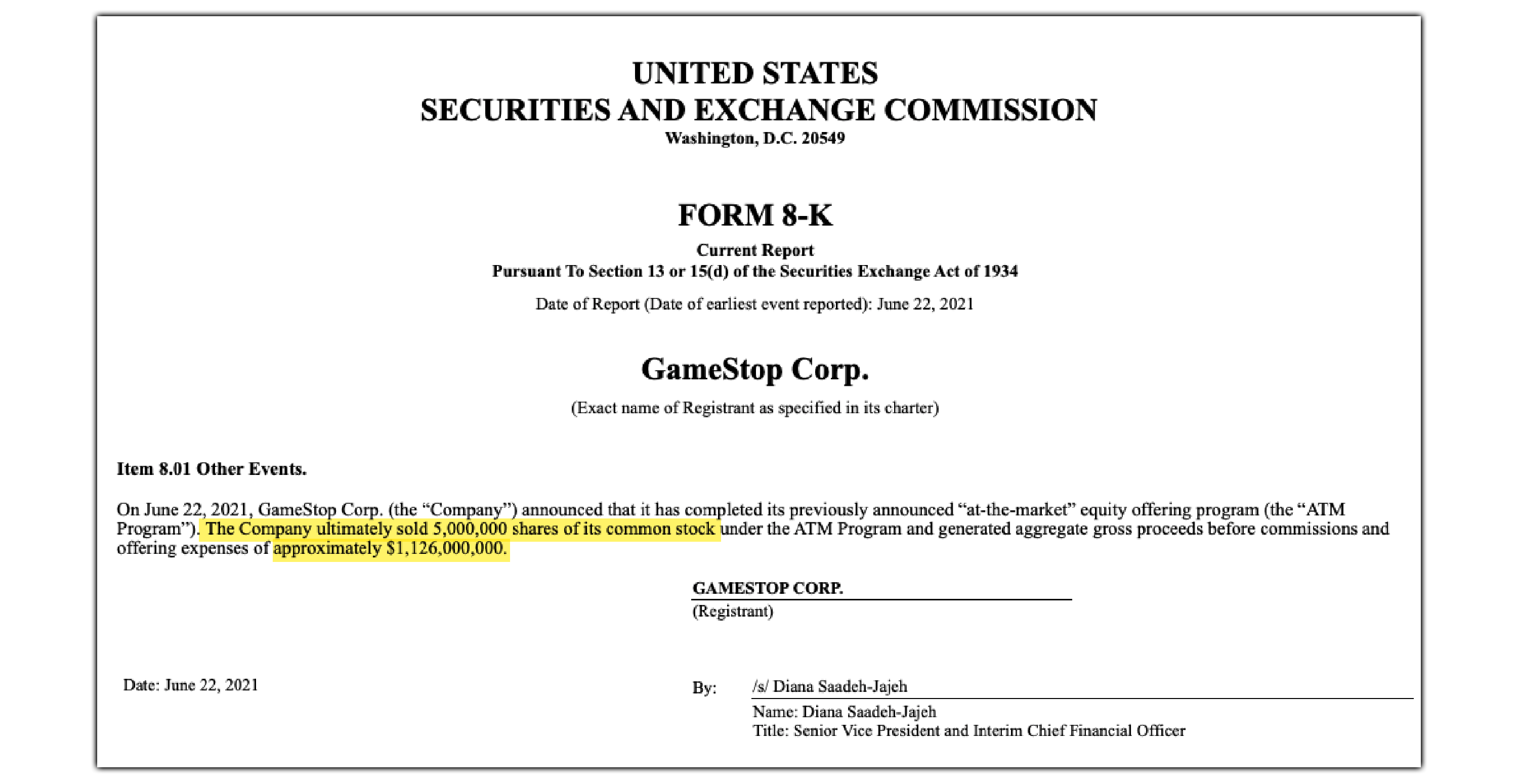 GameStop disclosed on June 9, 2021 that it filed a prospectus supplement with the U.S. Securities and Exchange Commission to offer and sell up to a maximum of 5,000,000 shares of its common stock from time to time through the ATM Offering.

GameStop states that the company will use net proceeds from the ATM Offering for general corporate purposes as well as for investing in growth initiatives and maintaining a strong balance sheet. 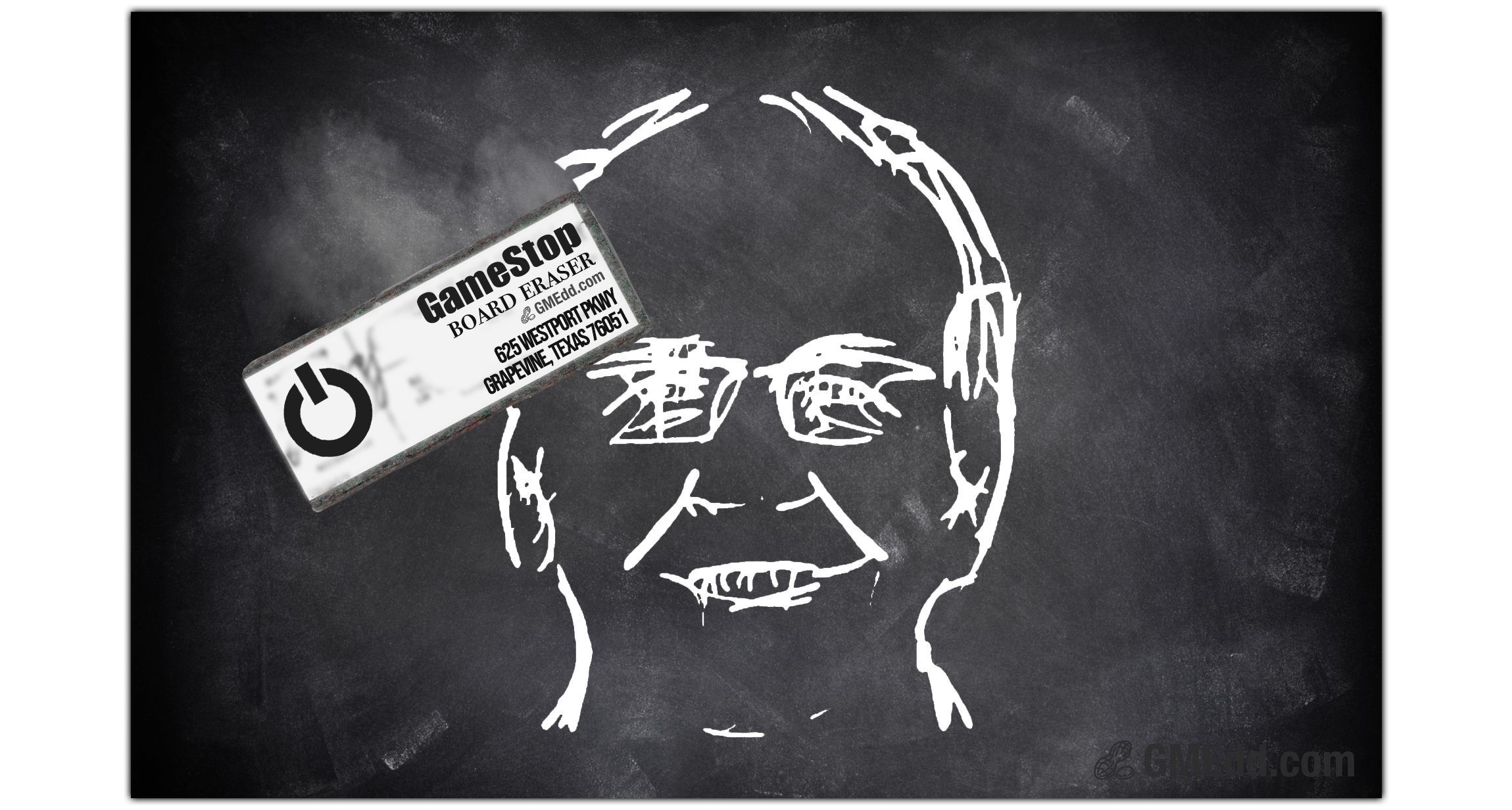 George Sherman, who was set to officially step down from his CEO role next month, has served as the Grapevine-based video game retailer’s chief executive since 2019.

Coinciding with Mr. Furlong’s appointment, George Sherman has retired from the Board. Five of the six members of the Board remain independent.

Sherman’s resignation from the board is effective immediately.

Announced in addition to Quarter 1 earnings, GameStop Corp. intends to file with the U.S. Securities and Exchange Commission a prospectus supplement to the base prospectus included in the Company’s shelf registration statement on Form S-3 under which the Company may offer and sell up to 5 million shares of its common stock, from time to time, in “at-the-market” offerings.

The Company intends to use net proceeds for general corporate purposes as well as for investing in growth initiatives and maintaining a strong balance sheet. The timing and amount of any sales of shares, if any, will depend on a variety of factors, including prevailing market conditions, the trading price of shares and other factors as determined by GameStop Corp.

In the prospectus supplement, GameStop states that on June 8, 2021, the last reported sale price of common stock on the NYSE was $300.00 per share.

Jefferies will be entitled to compensation at a commission rate of up to 1.5% of the gross sales price per share of common stock sold through it as sales agent pursuant to the Sales Agreement. 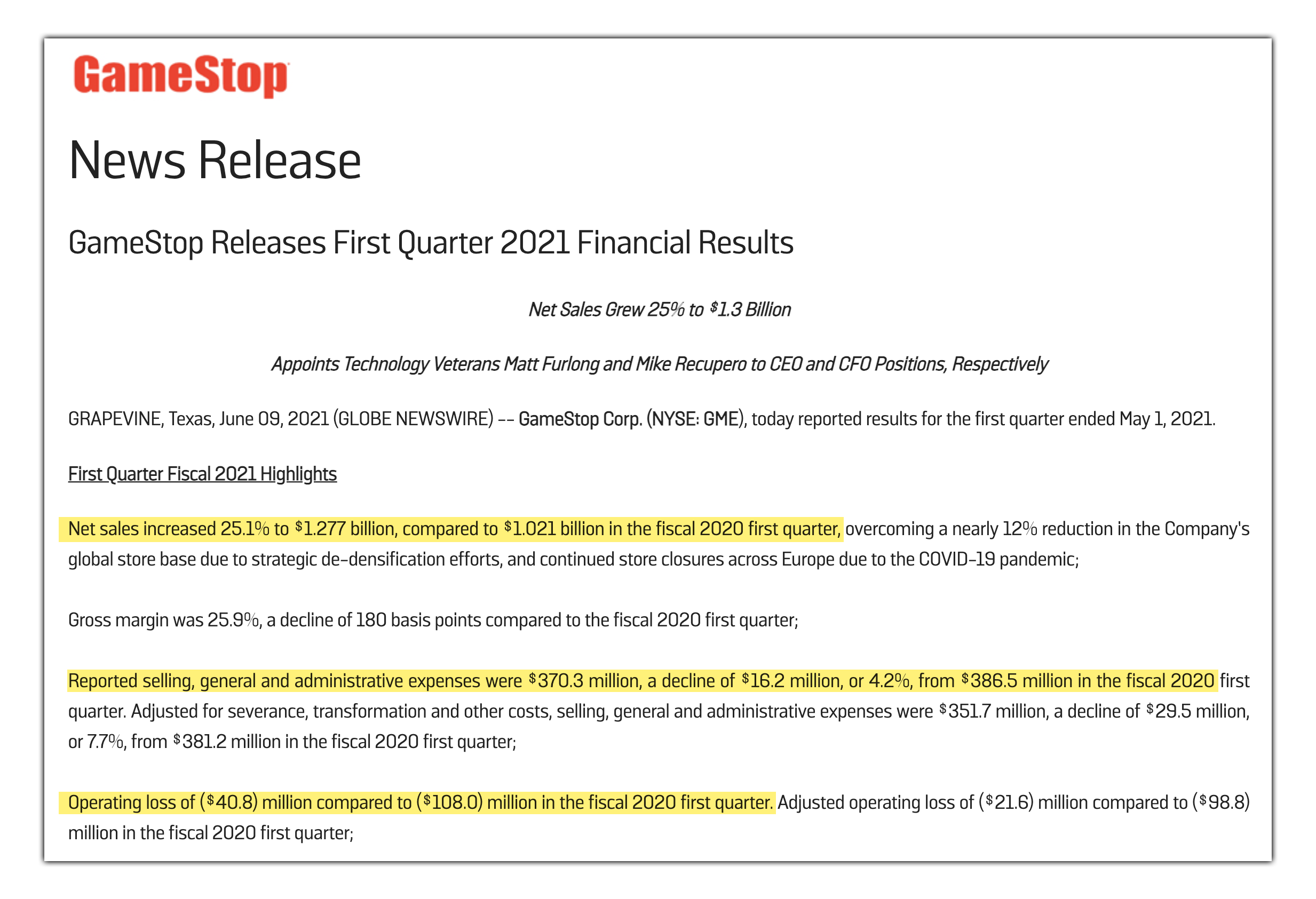 On April 26, 2021, the Company announced it raised approximately $551.7 million in net proceeds through the issuance of 3.5 million shares of common stock under its “at-the-market” equity offering program, resulting in total shares outstanding of approximately 71.9 million. The Company has used and intends to continue using net proceeds to accelerate GameStop’s transformation as well as for general corporate purposes and further strengthening the balance sheet.

GameStop has unveiled on their investor relations page that they will be livestreaming the Q1 2021 Earnings conference call webcast on YouTube.

This is highly unlike most other public companies, and may be a sign of GameStop paving the way to become more forward facing and shareholder-friendly with Ryan Cohen now serving as Chairman of the Board. 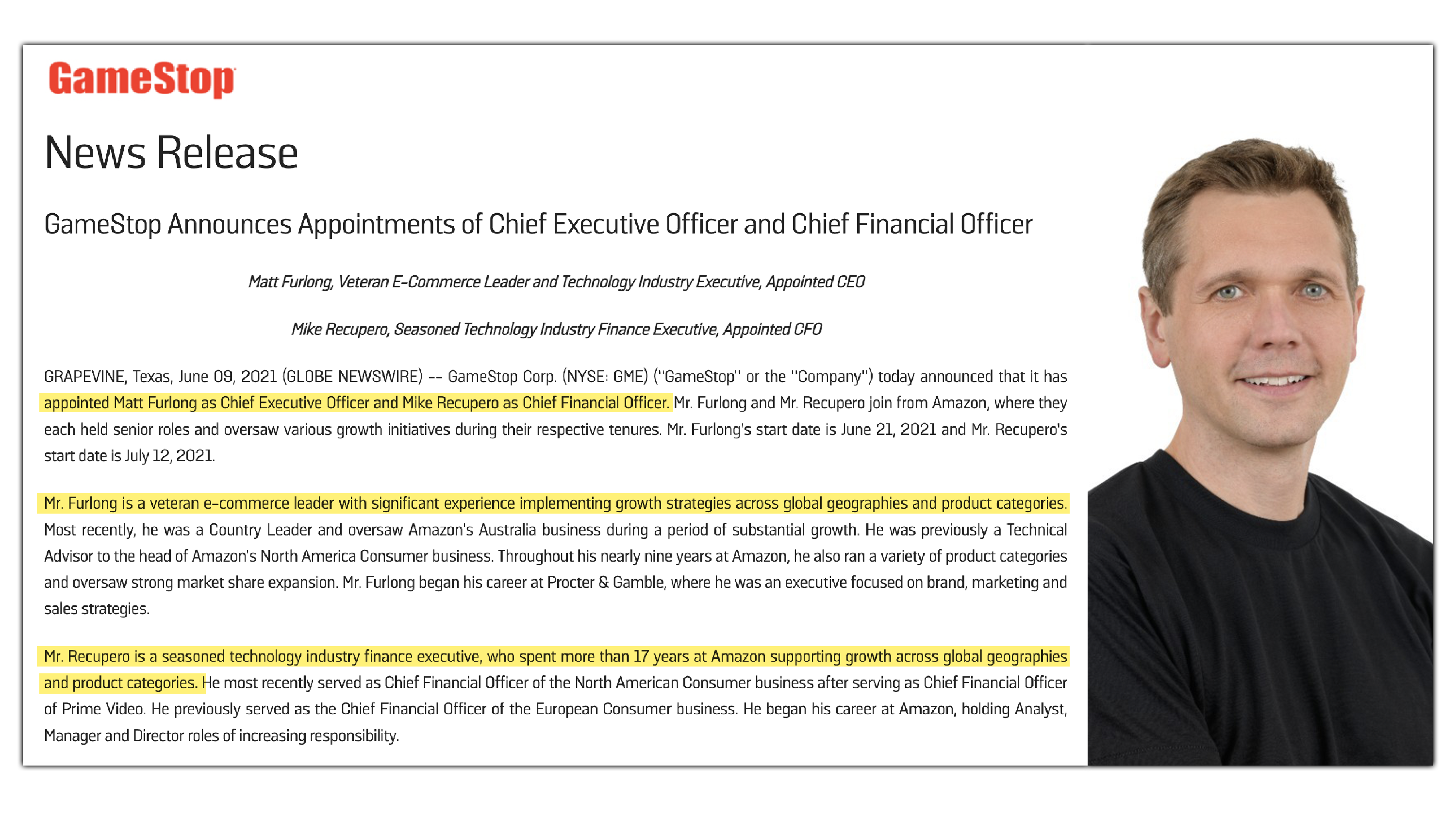 GameStop Corp. today announced that it has appointed Matt Furlong as Chief Executive Officer and Mike Recupero as Chief Financial Officer. Mr. Furlong and Mr. Recupero join from Amazon, where they each held senior roles and oversaw various growth initiatives during their respective tenures.

Mr. Furlong is a veteran e-commerce leader with significant experience implementing growth strategies across global geographies and product categories. Most recently, he was a Country Leader and oversaw Amazon’s Australia business during a period of substantial growth. He was previously a Technical Advisor to the head of Amazon’s North America Consumer business. Throughout his nearly nine years at Amazon, he also ran a variety of product categories and oversaw strong market share expansion. Mr. Furlong began his career at Procter & Gamble, where he was an executive focused on brand, marketing and sales strategies. 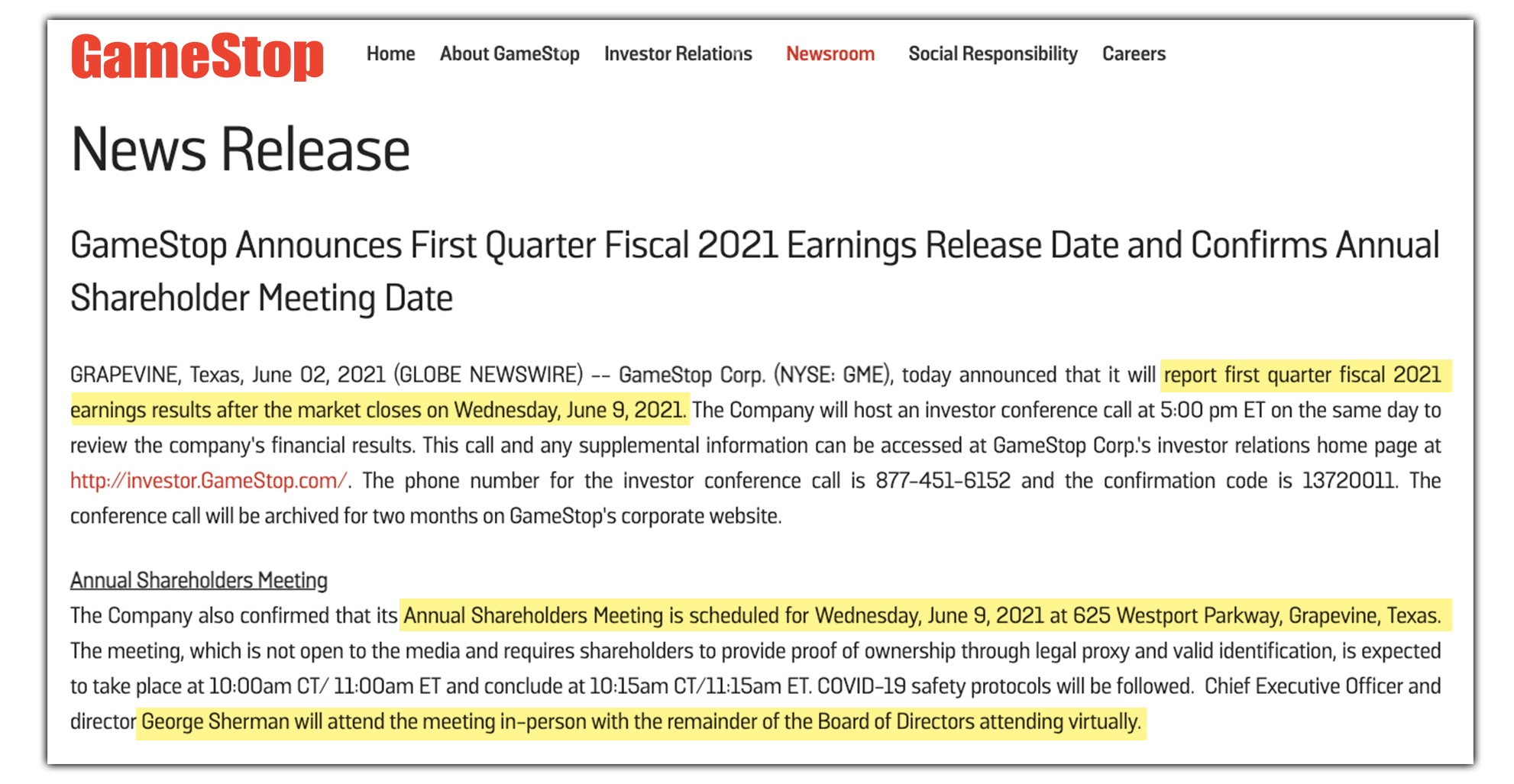 At the conclusion of a highly volatile day for NYSE:GME, GameStop Corp. today announced that it will report first quarter fiscal 2021 earnings results after the market closes on Wednesday, June 9, 2021.

The Company will host an investor conference call at 5:00 pm ET on the same day to review the company’s financial results. The call and any supplemental information can be accessed at GameStop Corp.’s investor relations home page at Investor.GameStop.com. The phone number for the investor conference call is 877-451-6152 and the confirmation code is 13720011. The conference call will be archived for two months on GameStop’s corporate website.

GameStop has also confirmed that its Annual Shareholders Meeting is scheduled for Wednesday, June 9, 2021 at 625 Westport Parkway, Grapevine, Texas. The meeting, which is not open to the media and requires shareholders to provide proof of ownership and valid identification, is expected to take place at 11:00am ET and conclude at 11:15am ET. Chief Executive Officer and director George Sherman will attend the meeting in-person with the remainder of the Board of Directors attending virtually.

GameStop will be putting their recently raised $551M to use, announcing a new fulfillment center on the east coast.

When Ryan Cohen was asked about fulfillment at Chewy during his TechCrunch interview in 2019, the founder discussed his opening of a fulfillment center in Pennsylvania, where, over the years, that warehouse has grown so much the company subsidized a Capital Area Transit bus route from Harrisburg and even opened a nearby recruiting office.

We hit an inflection point where three [third-party logistics companies] we were working with [were getting overwhelmed]. We’d give them weekly or monthly projections so they could plan ahead and have warehouse space, but they didn’t fully believe our growth and by the end of 2013, we had these 3PLs that couldn’t scale any more, so we had to bring fulfillment in-house.

More recently, in March 2021, Chewy announced another, new, Pennsylvania fulfillment center, and this one is located in York, same as GameStop. Chewy’s new facility is also similar in square footage, at about 732,000-square-feet.

The chewification of GameStop continues. 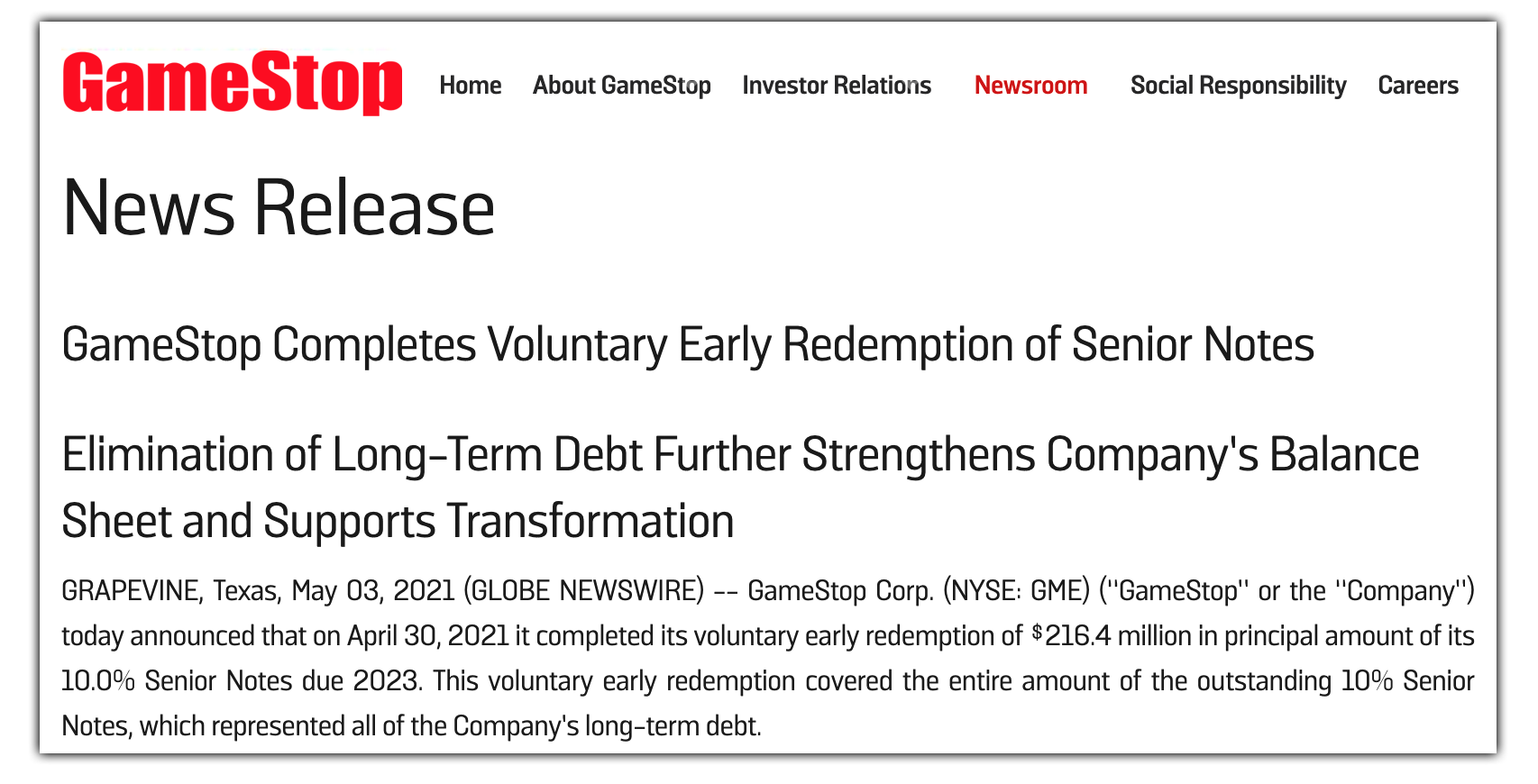 On April 13th, GMEdd reported that GameStop would be engaging in the early redemption of Senior notes, in order to eliminate long-term debt.

If the $551M raised through the share offering was funding this early redemption, GameStop still has ~$335M of that capital to spend towards transformation efforts.

In GameStop’s Q4 2020 Form 10-K filed March 17th 2021, these 2023 Senior Notes were cited as a restriction to the company’s ability to take advantage of certain business opportunities, such as:

With long-term debt eliminated, GameStop will be free to declare dividends, repurchase stock, make loans, sell assets, engage in mergers and acquisitions, and more.  This action enables the company to remain flexible while undergoing the transformation.