This is not a new trend, and highly unusual for any stock. Since we’re all about open source information, I’ve pulled together a file of all the fails since last July. I’ll refrain from speculating on what this means here.

Click here or on the download icon under the table to investigate the data on your own.

We’re so thankful for all the feedback we’ve gotten and the way the community has rallied around GME. While Friday’s close was above the fair market value of our bull case, we advocate for active price discovery by all market participants.

As it’s become clear that some participants are being excluded from the market – which breaks every norm of free & fair exchange upon which our society is built – we wanted to highlight some other community sites that have spun up to cover other elements of the GME story:

Happy Sunday, and may happiness & profit find us all everyday.

Low and behold, just minutes after we published our  Research Report & Financial Model, Zhiyuan Sun at The Motley Fool posted “3 Wildly Undervalued Stocks to Buy for 2021”  – and listed GameStop as #1! 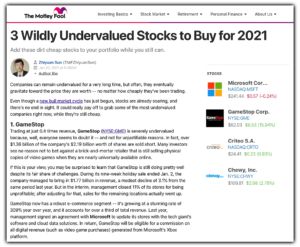 We’re so glad that not only does Motley Fool agree with the severe mispricing of GameStop shares, but their own valuation is inline with our ‘base case’ scenario (value of $80 per share).

Oh, and remember the Citron fools who were supposed to smash the short thesis wide open today? Retreating. Apparently, they’re so smart to know and see more than everyone else in the market – but made the 1st year analyst mistake of booking a meeting without checking everyone’s calendars first… 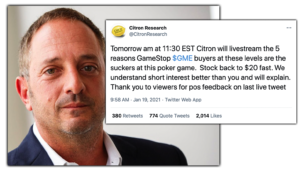 The shareholder collective represented here is joyously awaiting to hear what they have to say, and will be posting a reply to cut through the FUD. 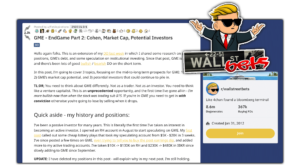 Reddit user FatAspirations is killing it with a multiyear look into GameStop’s potential value in comparison to Chewy.

TL:DR; You need to think about GME differently. Not as a trader. Not as an investor. You need to think like a venture capitalist. This is an unprecedented opportunity, and the first time I’ve gone all-in – I’m more bullish now than when the stock was trading sub $15. If you’re in GME you need to get in with conviction otherwise you’re going to lose by selling when it drops.

You must read this.

Rad Ballzman going off on Twitter with the GME story and a valuation model.

GameStop (GME) closed Friday at $35.50, up 1000%+ from its all-time low close of $2.80 on April 3rd, 2020. The company had been de-rated to below liquidation levels. The enduring mainstream/sell-side narrative has been that GameStop is a rudderless ship without a sail; dead/dying, Blockbuster 2.0, a relic B&M retailer of a bygone era whose legacy physical gaming software based business is mere years from obsolescence, and there is no hope. Talking heads like Jim Cramer are asserting that the rapid price re-rating that occurred last week (~+100% on the heels of a Sunday settlement with RC Ventures (Ryan Cohen’s [Chewy Co-founder and e-commerce savant] investment vehicle) is malarkey and going so far as to call up the company BEGGING them to issue shares.

I have heard this story for years. Personally I began investing in GameStop with 100 shares @ ~$19/share in 2017. Fast forward to August 2019 and as I averaged down it became my largest position. Today GameStop remains by far my largest investment holding, and I have no intention of selling before the stock reaches fair market value. And FMV is not nearly upon us.

On behalf of a loose shareholder collective representing 4.0% of GameStop’s shares outstanding I contacted RC Ventures amid the recently resolved activist fight, lending our support behind the direction they laid out in their  November 16th letter  to the board. While the direction of Ryan’s vision largely aligned with that of the existing management team, his proven track record of delivering delightful digital experiences through what his team built at Chewy resonated deeply with myself & other members of the shareholder community. Ryan, Alan, and Jim’s appointments to the further refreshed GameStop board truly change the game.

And so tapping into the thousands of aggregate hours that this loose shareholder collective (and let me be clear, I disclaim all beneficial ownership beyond my small personal ownership stake. It’s simply easier to speak with one voice for the many) has spent analyzing GameStop across every facet of its business, we have decided to put forth this thesis articulating why GameStop’s future remains far brighter than the FUD campaigns, talking heads, and short parties would have you believe.

There are assumptions that underpin any transformation. In our view, the general themes of the GameStop Reboot strategy laid out by legacy management have borne fruit. Married with the accelerated pace of implementation that can be expected by an entrepreneurial ego like Cohen’s, new ideas and business models building off the successful base reboot can be enacted at breakneck speed. Metaphorically I put it like this, the ship is built (the legacy business, supplier/customer relationships, etc.) and GameStop is upgrading from a wooden boat at risk of the wind (console cycle) to an asset lighter hovercraft that retains the core competencies but expands beyond and gains a powerful e-commerce rocket engine that it would’ve otherwise never had. We appreciate that our timing, estimates, and assumptions may prove inaccurate. In our view, given the expected retrenchment to a North American entity, continued domestic store closures, expanded advertising tech platform, Microsoft revenue sharing , etc., the reinvented business offers the following bear, base, and bull valuation targets using an exit multiple on forecast 2023 EBIT:

We’ve attempted to be tempered in our valuation approach. You can find further detail at GMEDD.com, but we will tease the following bull case highlights: