Ryan Cohen has tweeted once again. At 1:36 PM on Thursday, April 8th, Ryan Cohen has opted to share a reference to the latest GameStop news: That he will be the chairman of the board.

Luckily, we don’t feel the need to delve too deep into this one. It’s a pun on the term “chairman,” if your smooth brain didn’t quite get it yet.

This morning, reddit user u/ButtFarm69 (Seriously) added Ryan Cohen’s face onto the photo and posted his artistic creation on the subreddits r/Wallstreetbetsnew and r/SuperStonk. Ryan Cohen sinfully removed u/ButtFarm69’s watermark from the bottom right of the meme.

Thanks for making us all share a laugh, Cohen. Now we know you’re watching, and hopefully sharing a laugh too.

GameStop has today announced that the board intends to elect Ryan Cohen, founder of Chewy, as Chairman of the Board at the annual meeting, which will take place in Grapevine Texas on June 9th, 2021. GameStop also states that it will be nominating the following six individuals to stand for election to its Board of Directors: Alan Attal, Larry Cheng, Ryan Cohen, Jim Grube, George Sherman and Yang Xu.

GameStop has also shared updates that include:

About the new names

Larry Cheng is Co-Founder and Managing Partner of Volition Capital, a leading growth equity investment firm based in Boston, Massachusetts and the first investor in Chewy. He has more than two decades of venture capital and growth equity investing experience based on time at Volition Capital, Fidelity Ventures, Battery Ventures, and Bessemer Venture Partners. He presently leads the Internet and Consumer team at Volition, focusing on disruptive companies in e-commerce, internet services, consumer brands, and digital media and gaming. He received his bachelor’s degree from Harvard College where he concentrated in Psychology.

Yang Xu is Senior Vice President of Global Finance and Treasury at The Kraft Heinz Company. She has more than 20 years of broad experience across the capital markets, finance, strategic planning, transactions and business operations in the U.S., Asia and Europe. Prior to The Kraft Heinz Company, she held roles with Whirlpool Corporation and General Electric Healthcare. She has a bachelor’s degree in Finance from Wuhan University, a master’s degree in management from the HEC School of Management and a master’s in business administration from the London Business School.

What does this mean?

First, we are glad to see that RC Ventures is, in fact, on pace to control the GameStop board. Surprisingly, though, without Kurt Wolf and instead a former venture capital partner from his Chewy days.

With Cohen being placed as chairman of the board and Sherman to be re-elected, George Sherman will remain serving as CEO. There is also an apparent reversal in Jim Grube being asked to serve on the Strategic Planning and Capital Allocation Committee, a team we speculated he wasn’t originally a part of , anticipating a CFO announcement instead. Could both Jim Grube as CFO and Ryan Cohen as CEO still happen? Of course. But it seems they both may already have found their roles, for now at least. 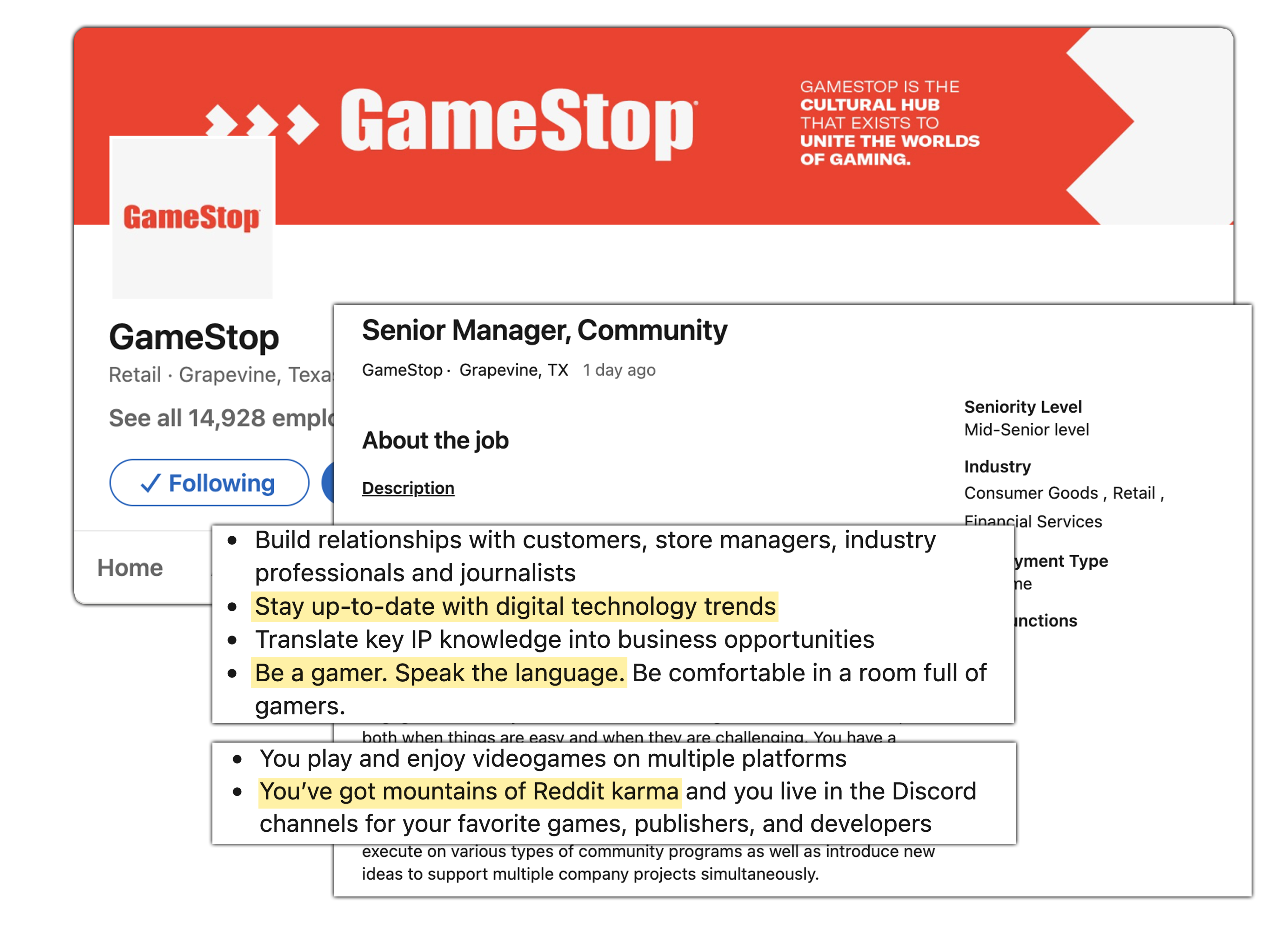 Spotted on GameStop’s LinkedIn page is a new Community Senior Manager position that describes an opportunity to represent the GameStop community.

As we’ve discussed in the past, looking at GameStop’s job openings can work as an inside look into the transformation taking place.

What’s interesting is the language used to describe the Essential Job Duties, Responsibilities, and requirements of this Community Senior Manager position.

You know what players want, sometimes even before they do.

Most notably, GameStop asks that applicants:

What we can gather from this is GameStop is well-aware of their newfound Reddit fame, and are looking to capitalize on it. GameStop also asks that applicants are “comfortable in a room full of gamers.” What could this indicate? A potential expansion into gaming tournaments or PC Bangs / LAN lounges?

Speculation aside, it is clear that GameStop is no longer being run by boomers who don’t game: GameStop is now actively seeking to acquire gamers.

Tae Kim, a technology columnist for Bloomberg Opinion, has published an article titled, “GameStop Stock Mania Is Making Its Turnaround Possible” The article references how the $1B offering is bullish for GameStop and allows Ryan Cohen to fund his transformation moving forward, shifting away from the traditional retail experience.

It is a prudent and necessary move. With GameStop’s share price up nearly 900% this year, the company will be able to raise significantly more funds to expand its e-commerce capabilities. The turnaround plan outlined in its latest annual report includes building fulfillment operations for faster delivery times, overhauling its website and starting a U.S.-based customer service operation. All these initiatives are needed to improve GameStop’s customer experience and will require significant investments.

Tae Kim has been reporting on GameStop’s fundamentals since long before the volatility of January, so we recommend checking him out.

The release also notes how GameStop has operated with a ~13% decrease in store base due to its strategic store optimization efforts. 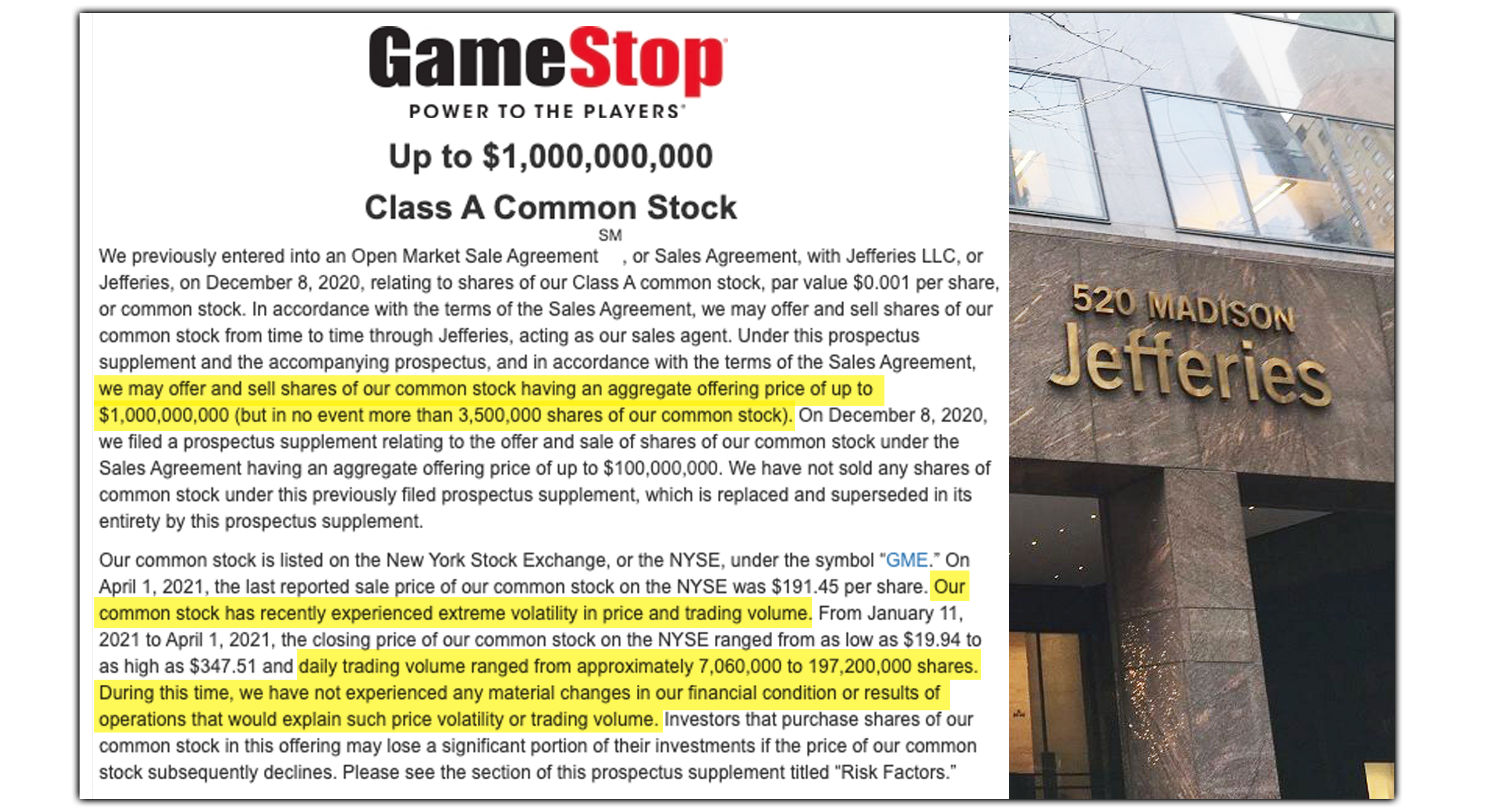 GameStop today announced that it has filed a supplement with the U.S. SEC in order to offer and sell up to a maximum of 3,500,000 shares of its common stock from time to time through an “at-the-market” equity offering program.

GameStop states that the company intends to use the proceeds from any sales of its Common Stock under the ATM Offering to further accelerate its transformation as well as for general corporate purposes and further strengthening its balance sheet.

The news release goes on to state that the timing and amount of any sales will be determined “by a variety of factors” considered by the Company.

Stock will be offered on the open market through Jefferies LLC which is serving as the sales agent. Sales may be made at prevailing market prices at the time, so as a result, sales prices may vary.

While this ATM offering dilutes existing shareholders, it is long-term bullish for the stock. 3,500,000 shares represents about 5.0% of the 69.9 million shares outstanding as of March 17.

In this Benzinga Power Hour clip from Thursday, April 1st, leading GameStop analyst and GMEdd.com Co-Proprietor  Rod Alzmann discusses his current life in the theta-gang. After sharing his thoughts on selling cash-secured puts on $GME, Rod explains how his projections are even higher than before, justified by GameStop’s latest corporate developments including recent Amazon and Chewy hires.

Rod and Luke also reflect on the insane premiums traders face in the $GME options chain. 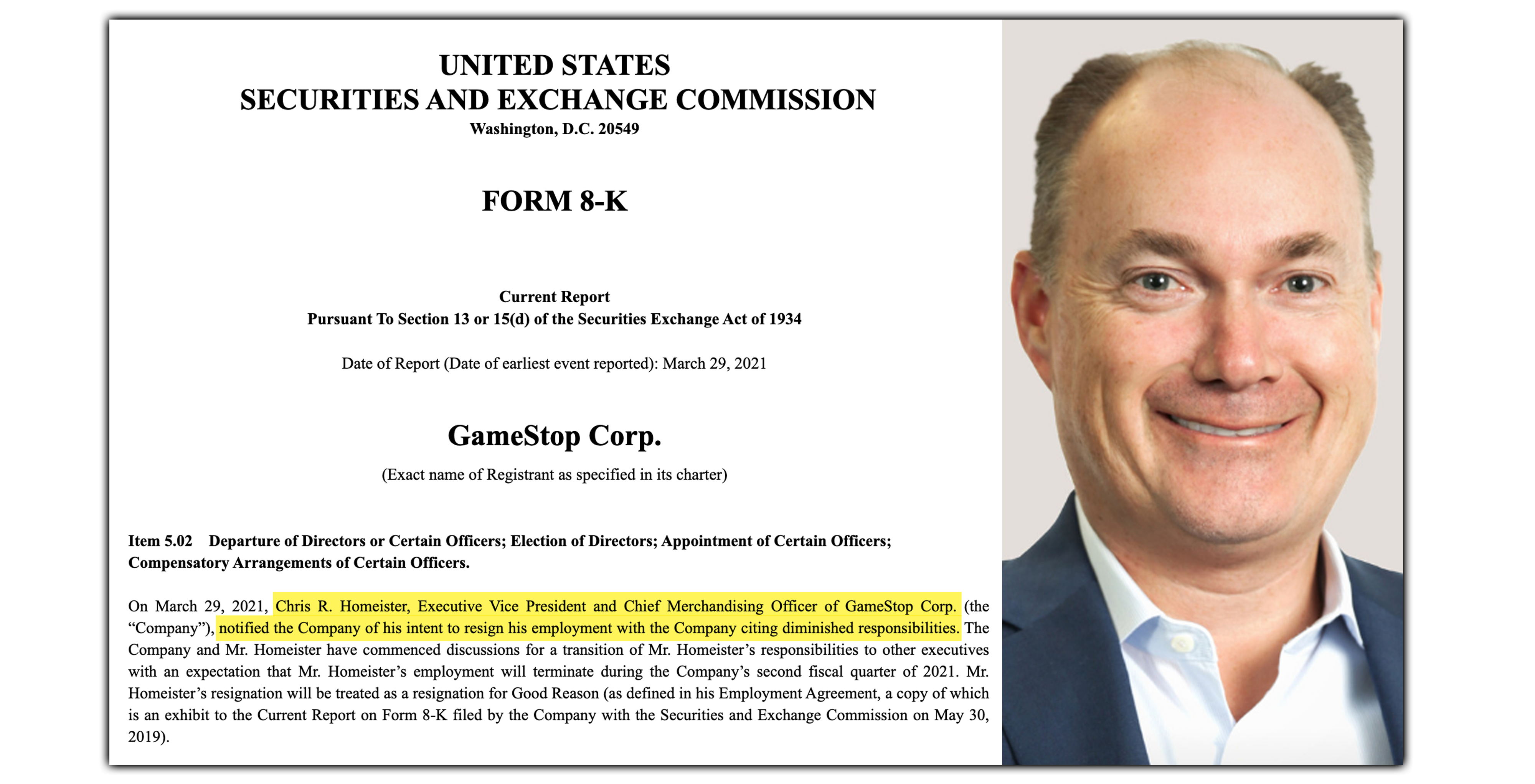 The executive overhaul continues as revealed today in a SEC Form 8-K Filing, GameStop’s Chief Merchandising Officer has notified the company of his intent to resign.

Chris R. Homeister had served as Executive Vice President and Chief Merchandising Officer for GameStop, a role he was appointed to in June of 2019.

As Chief Merchandising Officer, Chris was responsible for GameStop’s overall merchandise operations and strategy and all product and visual merchandising functions, including buying, planning, supply chain and logistics, and inventory control efforts.

Prior to joining GameStop, Chris served as President, CEO and a member of the Board of Directors of The Tile Shop, a publicly traded specialty retailer, where he grew the company in terms of product assortment, online and mobile capabilities, store count, employees, revenue and EBITDA.

Chris cited diminished responsibilities as the reason for requesting resignation. His employment will be terminated during Q2 2021.